Lamentable Level of Women's Issues Awareness in Japan: (1) Can the Prime Minister speak for his wife, who is involved in the Moritomo scandal?

Lamentable Level of Women's Issues Awareness in Japan:
(1) Can the Prime Minister speak for his wife, who is involved in the Moritomo scandal?
(2) Can the Finance Minister decide that his vice minister's sexual harassment is not serious enough to be punished?
(3) Is the sumo-ring so sacred traditionally that it should be cleansed of women?
(4) Can't marriage be based only on the mutual consent of both sexes in the case of Princess Mako? 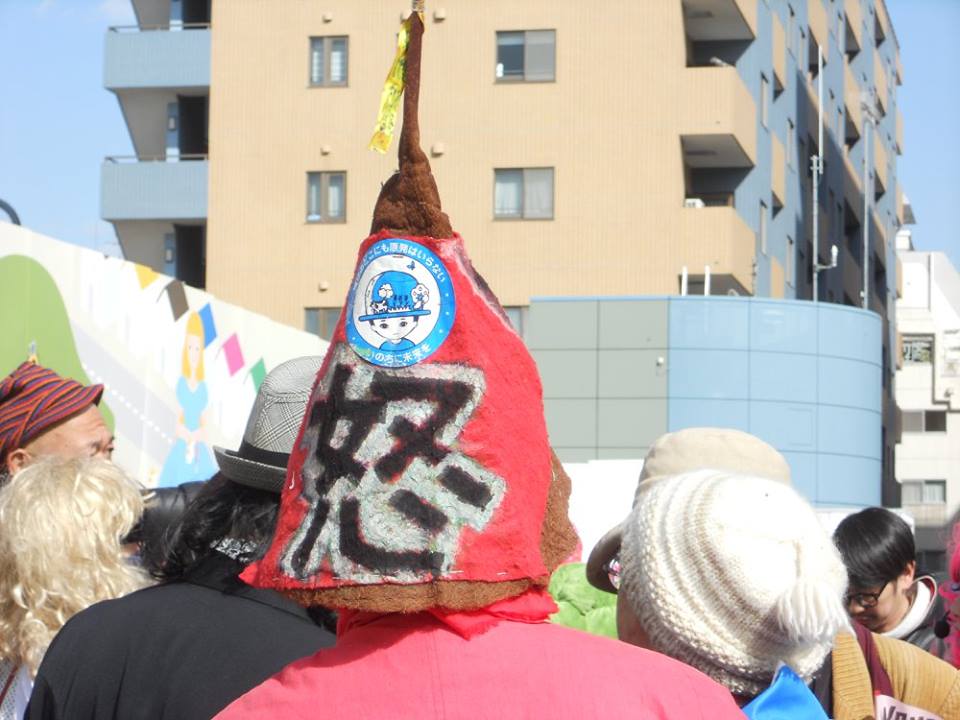 A Japanese woman's "anger" demonstrated in Women's March in March, 2018.

(1) Can the Prime Minister speak for his wife, who is involved in the Moritomo scandal?
The Moritomo Gakuen scandal broke out in February, 2017, as a result of a city assemblyman's persistent call for public information disclosure in Toyonaka, Osaka Prefecture, to reveal the fact that the state-owned land was sold to private school operator Moritomo Gakuen at a heavily discounted price.
Prime Minister Shinzo Abe's wife, Akie Abe, was an honorary principal and sympathizer of the ultra-nationalistic school built on the land in question. Even though her name immediately disappeared from the HP of the school, such unusually preferential treatment to a particular private school was suspected to be attributable to Akie's ties to Yasunori Kagoike, the school's director, and his wife. Kagoike actually mentioned that he asked for Akie's support through her secretary, who was dispatched from the Ministry of Economy, Trade and Industry to be assigned to the Cabinet Office from 2013 to 2015, and was finally promoted to the first secretary of the Japanese Embassy in Italy.
The opposition parties demanded Akie and her former secretary be summoned to the Diet, but the government insistently refused to do so on the grounds that the deal was properly processed and there was no unfair price negotiation.
Prime Minister Abe abruptly denied any link between him, his wife, and the land deal; he even stated that if any evidence was found he would resign.
The hot debate seemed to have cooled off as Kagoike was arrested in July, 2017, for receiving unlawful subsidies. The school was shut down.
But doubts were revived in March, 2018, as the fact of the alteration of a certain document pertaining to the land deal was exposed and its original version disclosed. The comparison between the two different versions clearly shows that, contrary to the claims of the government, the Finance Ministry, Kagoike, and the ministry's Kinki Local Finance Bureau negotiated to lower the land price in favor of the school. And the phrases referring to the negotiation as well as the names of key persons, including Akie and her secretary, were deleted.
It is notable, too, that the alteration was conducted just after Prime Minister Abe's flat denial, suggesting that the bureaucrats concerned were, implicitly or explicitly, obliged to delete any links between the Abes and the Kagoikes.
Kagoike also quoted Akie as saying, "Since this is good land, please move this forward." The government doubted the veracity of this remark, and Abe responded to the Diet committee, saying "I asked my wife about it and she told me that she never said words like that." He also added that he was giving answers to all the questions concerning his wife on his "grave" responsibility as Prime Minister.
Mizuho Fukushima, a social democrat, argued that husband and wife are different personalities and the husband cannot speak on behalf of his wife.
Nowadays, the old Japanese saying "Husband and wife should be one in body and spirit" sounds obsolete, and Fukushima is quite right. But there seems to be no significant follow-ups observed among Japanese feminists to voice their objection against Abe's patriarchal remark which suggested that his wife does not need to have her own voice and that the Japanese people should accept whatever the Prime Minister says on her behalf. 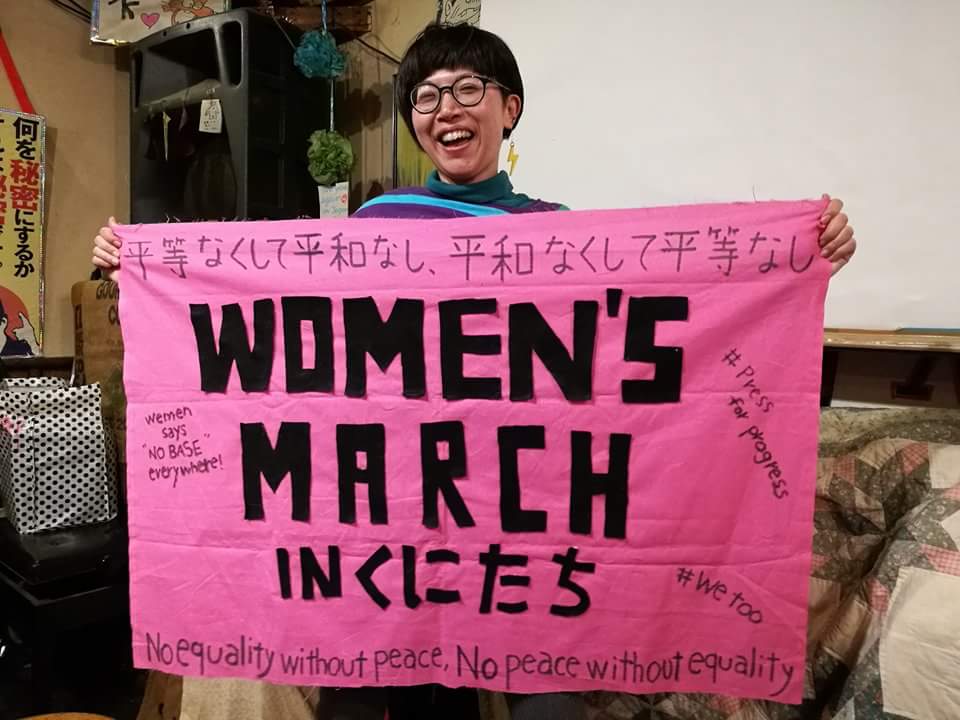 A participant in the March in Kunitachi

Katsuko, a woman in her seventies living in Tachikawa, Tokyo, was frustrated by this situation, but she was no longer able to organize protests against the Abes because she was busy with her regular local activities and on top of that, she had a problem with her leg. So, she decided to join a "guerrilla" march, instead, which took place in a neighboring town.
The Women's March in Kunitachi was joined by a small group of women who were not necessarily feminist activists. One of them, Yukiko, says that after the March 11, 2011, she and her friends initiated anti-nuclear demonstrations and have been talking about various kinds of actions. After the inauguration of US President Donald Trump, they were excited to see Women's Marches in USA and other parts of the world on TV or on the internet. So they came up with events about gender issues in 2017, and finally, this year, they had their own Women's March in their city under the theme of "liberation."
During the march, Katsuko had a chance to speak through a microphone and shouted "Akie, come out from behind the back of your husband!" urging her to be a woman, to be human.
She liked the spontaneous nature of the parade and enjoyed walking with younger women in various costumes, singing and dancing. But she still wonders why major Japanese feminists, both activists and researchers, don't voice their anger against Abe's perception of women.
This might be a reflection of Japanese feminists' continued indifference to husband-and-wife issues and apathy toward married women. Or, it is probably because Japanese people in general now regard more highly of self-made grass-roots activities in small groups rather than nation-wide actions advocated by prominent leaders. 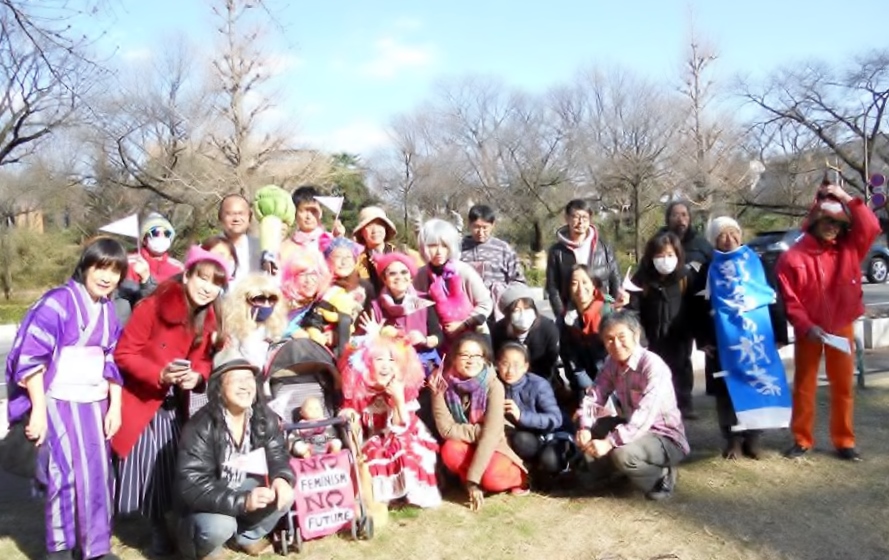