Lamentable Level of Women's Issues Awareness in Japan: (2) Can the Finance Minister decide that his vice minister's sexual harassment is not serious enough to be punished?

Lamentable Level of Awareness of Women's Issues in Japan:
(1) Can the Prime Minister speak for his wife, who is involved in the Moritomo scandal?
(2) Can the Finance Minister decide that his vice minister's sexual harassment is not serious enough to be punished?
(3) Is the sumo-ring so sacred traditionally that it should be cleansed of women?
(4) Can't marriage be based only on the mutual consent of both sexes in the case of Princess Mako? 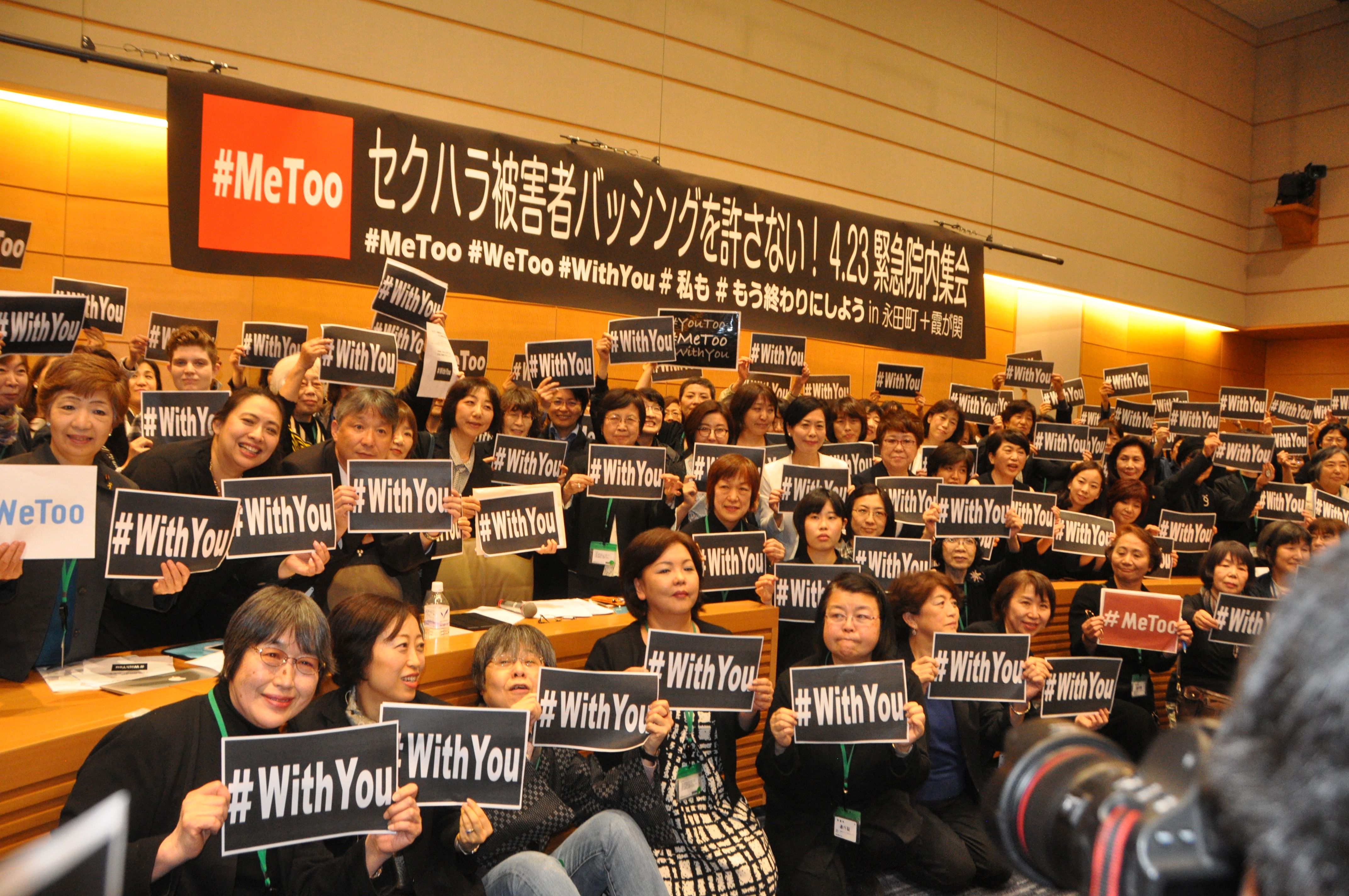 Scholars, journalists and politicians were united to express their strong support for the reporters, who were victimized not only by the actual sexual harassment on the spot, but also by the following bashing on the internet (February 23th in the Diet Members' Office Building I).

(2)
When an expose of repeated sexual harassment by Junichi Fukuda, administrative Vice Minister of the Finance Ministry, appeared in a weekly magazine the Shukan Shincho, Taro Aso, the Minister of Finance, arrogantly commented that he delivered an admonition, but since the Vice Minister showed him much regret, there'd be no need for investigation and punishment. He also mentioned that since the details like time and dates of the conversation which Fukuda allegedly had with female reporters/journalists are not identified, there was no way for verification.
On the following day, Aso said to the press, "if it is true, he is out in terms of sexual harassment." Fukuda himself kept silent while the magazine publisher partially uploaded the voice data of the conversation on the internet. There was only a recorded voice of man sounding like Fukuda, seducing someone whose voice is not heard. Fukuda said nothing but "there would be a comment issued on February 16th, so please read it."
According to the comment actually issued on that day by the Finance Ministry, Fukuda denied the fact of sexual harassment as was reported in the magazine, saying that he had no conversation like that, nor had he been to a bar with a female reporter as was suggested in the article. He stated he would sue the publisher.
In the comment, the Ministry also called for cooperation from the member companies of the press club belonging to the Finance Ministry, encouraging their female employees to come out and speak about their experience of sexual harassment by Fukuda, if there were any.
Not only feminists but also conservative newspapers such as the Sankei expressed objection against the comment forcing the publisher to disclose the information source. Kiyomi Tsujimoto, a chairman of the Diet Affairs Committee of the Constitutional Democratic Party, criticized the Finance Ministry in a nonpartisan group of female Diet members that they lack consideration for female reporters and asked the comment to be withdrawn.
The press kept hanging around the Vice Minister day after day until he finally stated on February 18th that he would resign because the situation made it very hard for him to perform his duties in office, even though he still denied the story reported by the magazine.
This arrogance and ignorance of women's issues on the part of the Ministry as well as Vice Minister Fukuda apparently ignited an indomitable spirit in journalists; few hours after the news of his resignation, at midnight on JT, Asahi TV had a press conference to reveal that one of the female reporters interviewed in the magazine is its employee and she certainly suffered Fukuda's sexual harassment to such an extent that she decided to record their conversation in which he asked her if he could kiss, touch, and embrace her. According to the magazine article, she kept saying "No".
She must have agreed to meet him personally more than once to collect information about the current affairs of the Ministry as a journalist, not as a woman to entertain him, and yet she was always treated like one and her suffering was never understood. That is why she is now determined to come out and fight back. The Minister and the Vice Minister of Finance have only made the matter worse every time they tried to cover it up.
And that is why Japanese female scholars, journalists and politicians were united, too, to express their strong support for the reporters, who were victimized not only by the actual harassment on the spot, but also by the following bashing on the internet. On the evening of February 23th, they gathered in the international conference room of the Diet Members' Office Building, the House of the Representatives, all dressed in black, raising a sign of "With you" or "Me too."