Following Part 1, here is the second report on the lecture by Professor Qu Yajun from Shaanxi Normal University, Xian, China, given at Nihon University on Sunday, November 11, 2012, entitled “Women, Peace, and a Nation’s Self-Examination.” 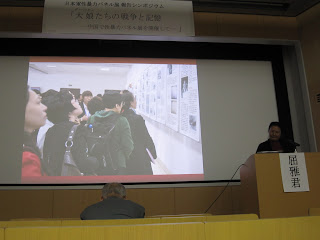 AT the beginning of this lecture, Prof. Qu spoke about how she was impressed by the activities of a Japanese citizens group voluntarily collecting materials and oral testimony about the Japanese army’s wartime sexual violence and its support for Chinese victims of that violence in lawsuits against the government of Japan for postwar compensation.
In addition, the Japanese group known as the Japanese Army’s Sexual Violence Panel Exhibition committee had organized a series of panel exhibitions in Japan to reveal the facts of wartime sexual violence and their own activities. Later they brought the exhibit to China and Prof. Qu and her colleagues attended the panel exhibition held in Shanxi in 2010 thanks to collaboration between the Japanese committee and local Chinese women. She instantly decided to invite the the exhibition to be held at her university, and in the following year it was actually held at the university attached Women Culture Museum in Shaanxi.
In her lecture, Prof. Qu quoted and analyzed various responses from Chinese visitors to the exhibition, including her bosses and nearly one thousand students. She also commented on the anti-Japan sentiment prevailing among the Chinese youth and their violent reactions against the Japanese government’s decision to purchase the Senkaku (Diaoyu) islands, and suggested how they could be interpreted in the current social context.
I would also like to insert my own comments inspired by her lectures, quoted words and the speeches of the other speakers and the audience.
(1) Responses from Chinese Visitors to the Panel Exhibition on Japanese Army’s Wartime Sexual Violence Held at Shaanxi University
According to the committee members of the panel exhibition, there were initial concerns that the exhibition might only fuel Chinese hatred against Japan, devastating the bilateral relationship. But it seems to me that the exhibitions received far more diverse responses than they had expected. The following comments of Chinese visitors to the exhibition in 2011, which Prof.Qu quoted in her lecture, evidently showed that at least the one held in Shaanxi accomplished much more than just sharing the historical facts.
Each statement is that of one Chinese visitor:
l “I take it to heart that this exhibition was organized out of sincere wishes for women not to be victimized by such violence even in case of war, without the intention of stirring up hostility against Japan. After all, if war happens again, women would be assaulted. That’s the reality. Now I know the problems reflected in this exhibition do not exist between one country and another, but between war and women….”
l “Having seen these abundant materials, I have never been so deeply moved as I have by today’s exhibition. These eyes, tears, memories full of scars and traumas I saw in the panels, made me closely touch the war history of women.”
l “I despise those people who laughed at and looked down upon the women who were raped during the war long after they survived it. I should hate them even more than Japanese soldiers.”
l “What impressed me most deeply is the fact that all materials of this panel exhibition were provided from Japan. Those Japanese people bravely stood up to assume the responsibility of their predecessors, made continuous efforts to seek historical truth, and supported our grandmothers in their lawsuit calling for the Japanese government’s apologies to help them regain their dignity. Those actions by highly conscious Japanese friends moved me so deeply. Now I know that to remember is to maintain peace and to express our wish that war shall never be repeated, not to express our resentment.”
l “I do not like nor dislike Japan. However, I think that the Japanese have something for us to learn from. History should not be used as an excuse for hostility….”
l “I want more teachers and students to visit this site and see this exhibition. This is not something you should receive once in a life like baptism, but is our history which we should repeatedly learn from and reflect upon.” 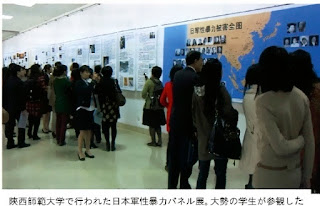 I remember, there had been a question of whether or not feminism could be transnational, a question raised and argued by Eastern Asian feminists since the UN Women conference in Beijing in 1995. It seems to me that the above words plainly show that feminism could overcome national boundaries. In this positive and symbolic achievement, feminism and transnationalism are two key factors as, in my view, the meaning of “transborder” is made most clear on when we are named Japanese by others and they are expected to behave like Chinese in China, and yet we and they can act upon shared values and theoretical framework.
(2) Significance of Anti-Japan Sentiment and Actions in Present China
Prof. Qu Yajun’s lectures were given when there was no sign of improvement yet in the China-Japan relationship as the new administration of China was yet to be determined, even though anti-Japan riots across China had been suppressed. Therefore it was extremely significant that she frankly mentioned about the Chinese anti-Japan sentiment to a Japanese audience toward the end of her second-day lecture.
Prof. Qu first admitted that there has been hostility against Japan in Chinese society, uniquely among the youth, and that is attributable to the memory of the war eighty years ago. I accept it as a premise for our mutual understanding of each other’s history.
But there was much more to it, she said, and so she continued and pointed out other inner factors driving the youth to violent action. Life is so hard for many of them, with the overwhelming pressure of competition at school and work, soaring land prices and rents. They want to blame somebody, but who would allow them to collectively blame anybody for anything? Finally, they saw Japan as the only safe target to attack.
Prof. Qu was concerned about Chinese people’s lack of understanding about Japan’s reality and diversity. She encourages the Chinese to recognize Japan as composed of those who are consistently reflecting upon their past history, and those who know very little about the past war and strongly desire world peace and friendship with China, as well as those who remain hostile to China, wishful to glorify war, and eager to repaint the undesirable picture of the past. They should know Japanese people are allowed to have different opinions, she said.
Prof. Qu also expressed her concerns about the frequent incidences of irrational reactions in various crashes between the two nations, emphasizing the danger of the whole nation fanatically applauding one thing (Olympics, for instance) or using the same vocabulary to blame one thing (Japan, for instance) for something or other. She even referred to a certain recent survey which revealed that more than half of the college students in China actually feel “so-so” about Japan.
One young Japanese man in the audience honestly admitted that he felt relieved by her words, which was quite understandable as we were exposed to repeated images of the infuriated Chinese youth abusing Japan on TV. I consider it necessary to overcome an obsession and nervousness toward China based on relative and broader perspective.

Needless to say, it does not mean that we could rely on such relativism to evade our historical understanding and post-war responsibilities in dealing with the war victims in China.

In that sense, it is encouraging to know that this year’s dispute has made decent citizens of Japan, especially young and naïve people, more aware of the historical and territorial issues than ever. I believe that they are becoming more wary of right wing extremists’ anachronistic attempts to rewind Japan’s history back to the age of nationalistic and anti-feministic fervor rather than attracted by their loud voices calling for “restoration” of Japan or “amendment” of the constitution.


Reported by FUKUOKA A. A

Japanese version was also written by FUKUOKA A. A