Sunset, Tacos, and the Film Subjects: Production Notes of A New Film “Talking Back: Theater for Breaking the Silence” (Tentative Title)

Stories move from the shadows to the limelight. And though the stage too often presents
the drama of our powerlessness, the shadows offer the secret of our power.
Rebecca Solnit, writer (1) 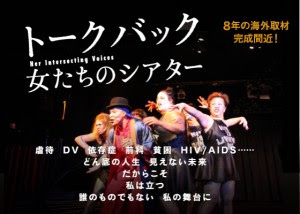 “Talking Back: Theater for Breaking the Silence” (tentative title), a documentary film in progress, is about “The Medea Project: Theater for Incarnated Women (henceforth the Medea),” a group performance intervention to empower women on margins, which started in the San Francisco County Jail with the support from an artistic organization, the Cultural Odyssey. I have been working on the film project approximately for eight years since 2006, and it is to be completed this fall. In this episode of the series, “Production Notes of A New Film “Talking Back,”* I will write about my recent visit to San Francisco to hold work-in-progress screenings (including one for my film subjects) as well as how I developed my relations with the Medea especially at its transitional period – shifting its target from the incarcerated to the women with HIV/AIDS.
(* This episode is the fifth one in the series by Kaori Sakagami)

I had had similar screenings in Japan between June and July and in U.S. from the end of July, three times for each part, but it was the first time to expose it to the subjects of my film and it got me very anxious.
I rang the bell of the familiar apartment, feeling a bit uptight. The door was suddenly opened, and Cassandra with red-dyed hair in a tank top appeared with a big smile on her face. She threw her arms over me and hugged me tightly, saying in a husky voice “Kory, I’ve been waiting for you!”.
I saw her about a half-year ago, but I felt like I had seen her more often. Because we communicate with each other often through Facebook and e-mail, I did not feel the distance from each other — Japan and the U.S. I even knew that she had been camping out with her friends till the previous day. I also learned that her live-in-six-year-old granddaughter, “V” begged Cassandra to let her stay longer and “V” ended up remaining there with her friend’s family. The source of information was Facebook.


*********************************************************************************
Cassandra is an African American woman who is HIV positive. In her late 50s, recovering from drug addiction with a long history of substance abuse since her teens, she had been in and out of jails and prisons for countless charges including illegal drug possessions, thefts, home-invasions, and forgeries. She was diagnosed of HIV in jail in the mid-1980s, but she had not revealed her status to anybody else except her own mother and sister until recently. However, they did not receive well and it discouraged her to do further disclosure. For instance, her sister treated her badly by banning contact with her children and giving Cassandra disposable paper dishes and utensils. Cassandra told herself “Since my own blood relative act like that, imagine how others would react! I would never, ever, disclose to anybody!”

Let’s get back to the beginning about a work-in-progress screening.
I was already informed that there would be only a couple of people to come to the screening due to the last minute scheduling. Some went on a trip for summer vacation, while others had to care for their elderly parents or to attend family events. Some of those who could not attend gave me a call or email saying that they were sorry for missing the chance, and a couple of them let Cassandra know that they were coming but being late.
Cassandra took me to her favorite Mexican restaurant in her neighborhood while we were waiting for the others to arrive. Cassandra lives in the Mission District of San Francisco, a place where ethnic minorities, mainly Hispanic or Latinos, live and streets are always with full of people. Markets displayed colorful fruits and vegetables. Exotic smells and sounds are streaming out of ethnic restaurants. Cool vintage clothing stores are lined up on the streets, and colorful painted murals are found everywhere. In the midst of this lively neighborhood, you see some stores and buildings with posted signs of “Closed” or “For Rent” which keep reminding us the severe economic crisis.
Cassandra kept talking to me, walking down the busy street where people with different ethnic backgrounds come and go. She told me about her oldest daughter who had been in prison and had been released recently got pregnant while still struggling with her drug habit and old crowd. She is the mother of “V” whom Cassandra has been taking care of for years. “V” has just turned 6 years old and will start the school from this fall but still hoping to live with her own mother and getting excited about having a new sibling. We chatted on the personal matters, type of things which would never go on Facebook.
Entering the Mexican restaurant, filled with spicy aroma and citrus scent, some memories suddenly came back to me — the 90’s when I directed a TV documentary program about a family living with HIV/AIDS in New York.
A non-profit HIV/AIDS organization introduced Layla to me, and we met at the first time at a small pizzeria in Queens where she lived. I bent an ear to Layla who shared episodes of her daily life while eating pizza with her and her two little sons at the same table. I ended up following her family for one year and captured their day-to-day reality. I learned so much from them and it has helped me face difficult situations in my real life. It certainly was my starting point in my filmmaking career and it made me realize that my attempt to make this film meant to return to origin.
When we left the pizzeria, the sky burned red. Feeling nostalgic, I could not believe that my film was nearly finished and I was walking down the street of San Francisco with my film subject who is HIV-positive, chatting and laughing.
Red sky before my eyes, steaming hot Tacos in my hand, and Cassandra next to me. All of them were actually there, but I never would have imagined them when I started getting involved in the Medea eight years ago and even when I started shooting for the film five years ago. What kind of reality awaits me after this film? What kind of encounter and discoveries would I have? I was no longer anxious but rather I felt inspired. (To be continued later in the Japanese series)
(1) Solnit, Rebecca. Hope in the Dark. New York: Nation Books. 2004. P.174.
*********************************************************************************
Thanks and Notice
We would like to thank Motion Gallery, the crowd funding site where we have achieved our goal. However, the funding for the promotion of our film still falls short. If you are interested in helping our film financially or for promotion, please make contact with us through the following website or e-mail us to outofframe@jcom.home.ne.jp.
“Talking Back” Film Project Fundraising Website:
http://outofframe.org/talkback.html

Written and translated by Kaori Sakagami (Documentary Director of “Talking Back”)

Original Article in Japanese: http://wan.or.jp/reading/?p=12100
Kaori Sakagami: independent documentary filmmaker & non-fiction writer based in Tokyo, chair of “out of frame” non-profit organization for collaborative media and art for kids and women with trauma, Visiting Associate Professor at Hitotsubashi University. She directed, produced and edited an award winning film LIFERS: REACHING FOR LIFE BEYOND THE WALLS(2004, out of frame) as well as more than a dozen of award winning TV documentary programs including MILLER ON MONSTERS, JOURNEY OF HOPE, and COMING OUT OF SHATTERED CHILDHOOD. Focused on criminal justice issues such as death penalty and habilitation of violent offenders by putting lights on alternative approaches from the perspective of trauma and recovery; namely Therapeutic Communities, Restorative Justice, collaborative Art programs, and community building approaches. Her current film project on all-women-theater TALKING BACK(tentative title) is to be released in 2014.