This December, a museum will open in Taiwan that retains the history for the purpose of resolving the Taiwan’s comfort women issue. Prior to this, I had an opportunity on September 4 to visit the Taipei Women’s Rescue Foundation that was in preparation of the museum and to interview its representative, Ms. Shu Hua Kang and its international public relations staff, Ms. Shuang-shuang Sandra Keng.
Taiwan’s Comfort Women Issue
The Foundation was established in 1987 setting out to stop trafficking girls for prostitution which they were forced into due to poverty. Since then, the Foundation has dealt with DV issues and, in 1992, started engaging in activities to resolve Taiwan’s comfort women issue. 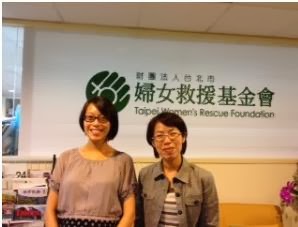 Representative, Ms. Kang (right) and Ms. Keng
The fact not so well-known in Japan is that many Taiwanese women were also forced to comfort Japanese soldiers during World War II. The estimated number of those women is approximately 2,000.
Since 1992, the female victims (like halmeoni in Korean, they are called ah-ma in Chinese which means grandmother) have spoken out and the number reached 58 by 1996. Many of them have passed away by now and there are only 6 survivors. The oldest of them turns 92.
Remained documents prove that women were recruited back then by the government office in Taiwan under Japan’s control and indicate the Imperial Army’s arrangement for transportation for the women. The Japanese government’s involvement in this matter has been clearly proved, however, all trials that demanded the Japanese government for apology and compensation to comfort women so far were lost. Still, the ah-masay they are not lost at heart.
The ah-ma and their supporters have had public protests on every August 15 in front of the exchange association (an alternative to the embassy). Although the Foundation and supporters have been the only protesters for the last 4 years due to aging of the ah-ma, they did hand over a protest to the association staff. Starting next year, the protest day will be switched to August 14 as it became the memorial day for comfort women.
Mental Care
Taiwanese ah-marefused the compensation offered by the Asian Women’s Fund in Japan because an apology by the Japanese government was all they wanted.
The Taiwanese government has not raised an official protest against the Japanese government but has offered livelihood aid to the ah-ma. The Foundation staff have supported the ah-ma treating every one of them sincerely.
The Foundation has particularly put an effort on mental care.
The Foundation and supporters have offered over 70 workshops for the ah-ma who were physically and psychologically hurt as young and had lots of hardships even after that. Creating an opportunity for the ah-mato enjoy singing, dancing, and drawing pictures, and also speak out their memories helps them to bring out their anger against the Japanese government as well as their harsh fate, and also to heal their pain in heart. Some workshops gave an opportunity to put on a wedding dress to the ah-ma who gave up on marriage for the past that they had no choice but to become comfort women.
There was also a project to make the ah-ma’s dreams come true. Their dreams such as serving as a police officer or mail carrier for a day became real in the project. Behind those dreams was the adoration of the ah-mawho took care of laundry at the police department over 20 years or who longed to be a mail carrier because the occupation was a civil servant and required a reading skill.
These activities show that the Foundation has supported every ah-ma’s life staying closely with their heart, which is quite impressive. These activities are no longer possible as the surviving ah-ma are quite old; however, counselors are still remaining a strong support for the ah-ma by visiting their homes individually.
The Foundation
The Foundation has also made a significant contribution to the revisions of laws in regards to violence against women and children. The executive board members of the Foundation are female activists and lawyers. Some woman started off with the activities at the Foundation and ended up as the legal director of the government. The Foundation’s strength is the connection with politics and laws. There are 50 staff members total and many of them are still young. Upon our visit, too, over 10 young staff members were working with their PCs at their individual booth in the Foundation office. These staff members are not volunteers but are paid the salary almost equal to the amount a university graduate with no career experience would usually receive in Taiwan. This made both my accompanied graduate student and me pretty envious. The Foundation is operated by the government assistance and donations. It made my wish for such a powerful women’s movement even stronger. 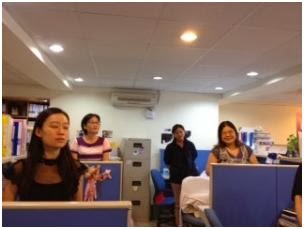 The Foundation staff
For the Museum Opening in December
The Peace Memorial Museum for the Comfort Women and Women’s Rights are surely getting ready for its opening on this December 10 (the World Human Rights Day). President Ma Ying-jeou is scheduled to attend the opening ceremony.
“The success of this museum is the first challenge,” says Ms. Kang. They wish the museum to be a training ground that hands down the history to the next generation and shows the history from a global viewpoint. It will contribute to prevent violence against women as well as wartime sexual violence.
“For the development, peace, and safety for women” – this is the motto of the Foundation. 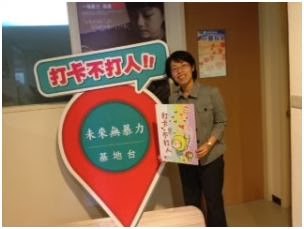 Representative Kang next to the sign of “No More DV!”
Through the visit to the Foundation, I was quite impressed with their powerful activities by sincerely staying close with female victims including comfort women. My wish now is even stronger for WAN to play a role in the global solidarity of women and strengthening of women’s rights.
Please visit the Foundation’s website which is also available in English (http://www.twrf.org.tw/index.asp) and the website of Taiwan’s Virtual Museum on Sexual Slavery by Japanese Military which is also available in Japanese (http://www.womandpeace.org.tw/www_jp/index.html). Furthermore, with the Foundation’s cooperation, the special exhibition “Taiwan “Comfort Women” Testimonies: How Ah-ma were Made into Japanese” is underway at the Women’s Active Museum on War and Peace (WAM) in Waseda, Tokyo until June 2014. (For details, see http://wam-peace.org/.)
WAN is planning to cover a story about the December museum opening on our website*.
*Note: The museum opening has been postponed to mid-2014.

Original article on the WAN website: http://wan.or.jp/reading/?p=12210
translated and adapted by K. Moriya.