Is the Target of 202030 Achievable? -- Symposium Held in Tokyo to Evaluate Japan's Act Concerning Promotion of Women's Career Activities 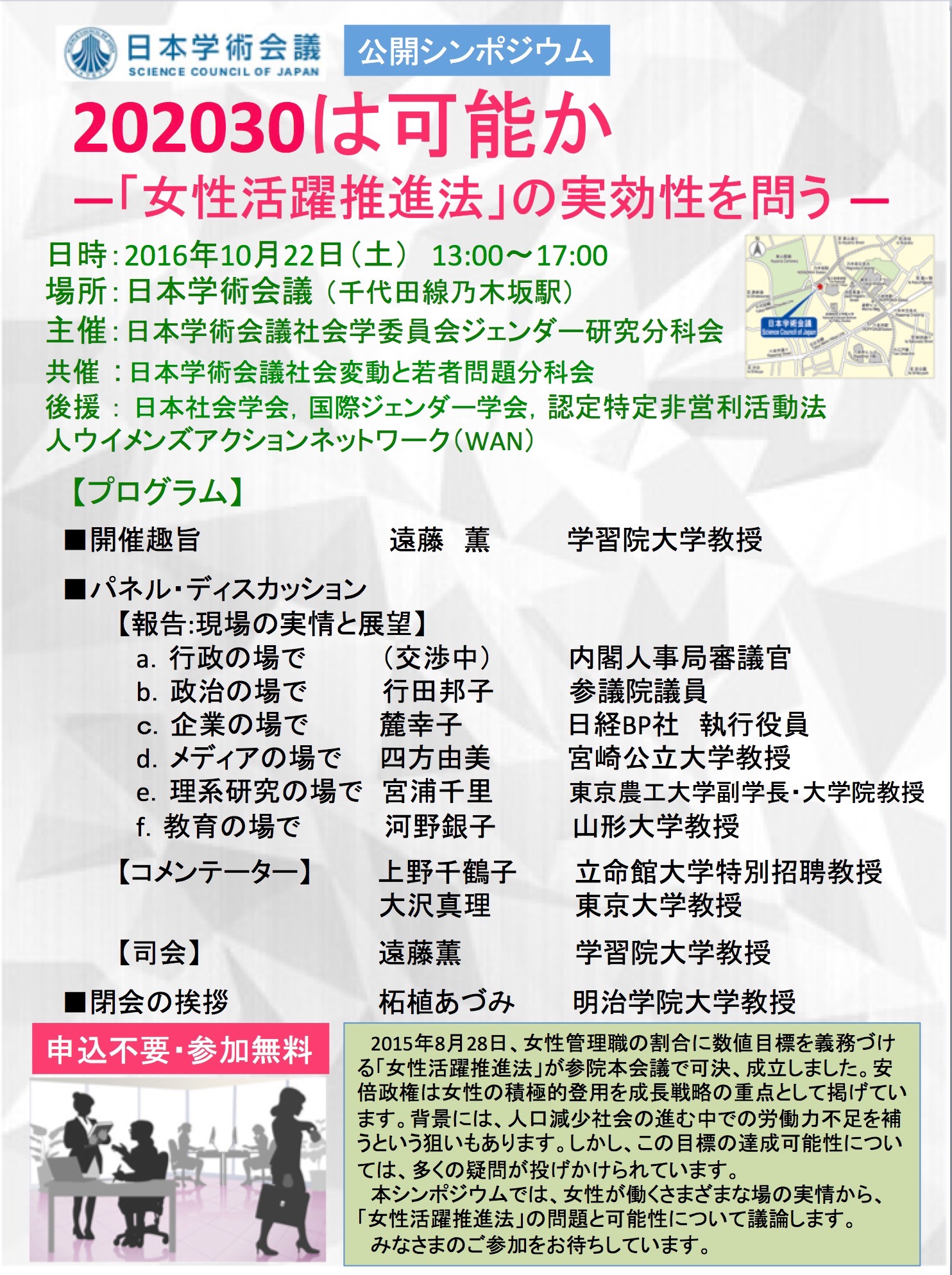 On October 22, 2016, a symposium was held to examine the effectiveness of the Act Concerning Promotion of Women’s Career Activities (PWCA). Based on the 1999 Basic Act for Gender Equal Society, the PWCA was enacted in August, 2015, with a limited effective period of 10 years to increase opportunities for women in workplaces. Large organizations in both public and private sectors are now obliged to set quantitative targets such as 30% of the leadership positions to be held by women by the year 2020. The symposium, held in the Science Council of Japan (SCJ) located in Nogizaka, Tokyo, was organized by the Gender Studies Subcommittee, Sociology Committee, SCJ, and supported by relevant academic societies as well as the Women’s Action Network (WAN). All the speakers, moderators, and commentators were women, including a councilor of the Cabinet Bureau of Personnel Affairs, a member of the House of Councilors, a board member of a publisher and professors of public universities.

Many of them reiterated the general fact that, according to major international indicators, Japan’s female representation in almost all industries and levels of women’s empowerment are much lower than those of other OECD states. For instance, both the ratio of women in managerial posts in the workforce (11.3%) and that of women in the Diet members (16.6% in the House of Representatives and 24.2% in the House of Councilors) are still far below other developed nations. In the field of education, where Japan’s public spending remains the lowest among OECD nations, the higher the level of the education is, the lower the ratio of female teachers.

But as a matter of fact, as Councilor Furusawa of the Cabinet Bureau mentioned, government organizations are also promoting measures not only for child care and elder care but also for better work-life balance for their own employees, encouraging male workers and their bosses to take longer child-care leave, too.

It was also suggested in some specific cases that if an individual at a relevant position is committed to meet the quantitative targets through qualitative changes in workplace practices, she could have a higher ranking decision-maker involved and make a remarkable difference. Professor Miyaura of Tokyo University of Agriculture and Technology reported that, under the leadership of its President and the Women’s Career Support and Development Center on campus, a wide variety of creative programs were developed to support researchers in science departments throughout their careers, thereby improving the research environment for their students and colleagues as well.

Both the panel and the audience of the symposium, however, were quite pessimistic about the achievability of the target 202030. After the presentations, one of the commentators, Professor Ohsawa of the University of Tokyo, raised a question as to whether or not the achievement of the quantitative targets could do any good, and if so, in what sense. Some people in the audience were apparently suspicious about the targets set by the government and even about the intention of the PWCA legislation. The other commentator, Professor Ueno, director of WAN, noted that while laws of this kind would take advantage of women, women could also take advantage of it in turn.

Original Article by FUKUOKA. A. A