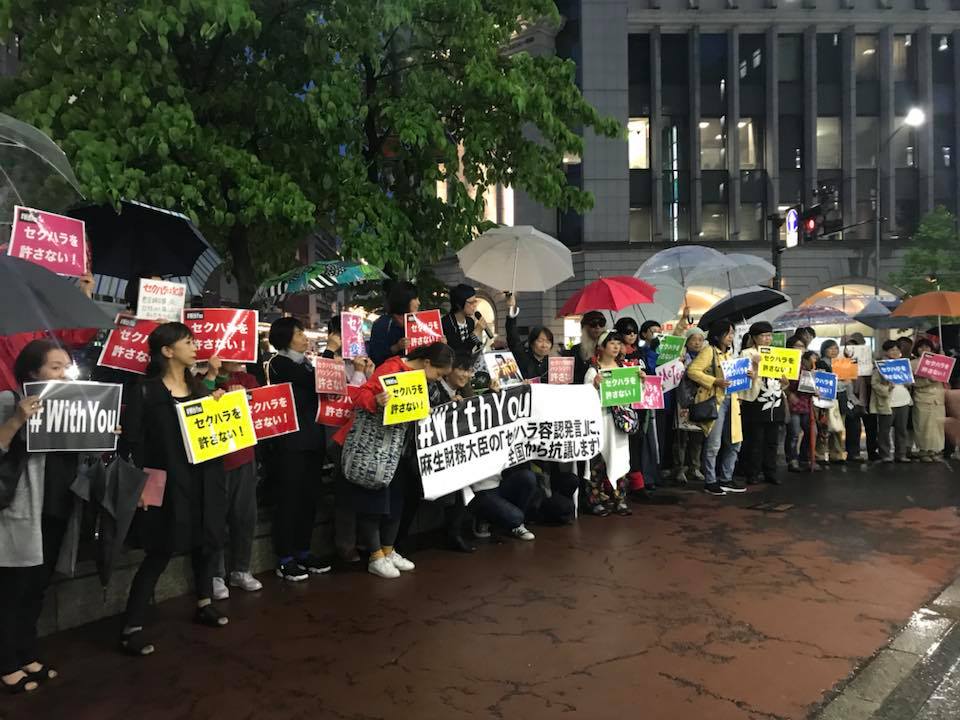 On May 7, about 80 female and male protesters gathered in Kyoto to raise their voice against the remarks by Taro ASO, the Japanese Finance Minister, on sexual harassment. Mr. Aso said "There's no such thing as 'sexual harassment charge' in Japan” when asked about public criticism against a case of sexual harassment allegedly committed by the ministry's top bureaucrat. The minister's comment drew harsh criticism from Japanese people.

The protesters in Kyoto believed the statement showed the minister and the ministry didn't understand anything about the seriousness of sexual harassment. They were angry about Aso's irresponsibility as the head of the Finance Ministry. The demonstrators included various citizens such as a feminist counselor, a lawyer, a gay city council member who'd come out. There were also citizens who have been raising their voice against the tyrannical policies of the Abe administration and activists who'd been demanding the Japanese government settle the "comfort women" issues.

The remarks by demonstrators were filled with fury and frustration. Here are some of them:

"The Finance Ministry did everything they should have NEVER done in handling the sexual harassment issue. Their 'solutions' were the worst things you could do for women victimized by sexual harassment or sexual assaults."

"The Japanese government has been failing to settle the 'comfort women' issue for 30 years. Now again, it has failed to settle the sexual harassment issue by one of its bureaucrats."

"In Japan, everyone forces the way women/men should behave on others. That's why sexual harassment happens in this society."

“The remarks made by Mr. Aso are unforgivable. He said ‘There's no such thing as sexual harassment charge in Japan' during a press conference in the Philippines. I believe it’s just like publicizing the misogyny in Japan to the world. Actually, here in Japan, nothing has changed for 30 years. I want to change the society where almost all women experience some forms of sexual harassment.”

“Anyway, I'd like Mr. Aso to resign as Finance Minister as soon as possible. As a young man, I find the set of values elderly men like him have weird and awkward.”

In the end, all protesters chanted slogans “NO MORE SEXUAL HARASSMENT.” That concluded the demonstration in the rain lasted for an hour.