Finland presented a special recognition to individuals and groups around the world who are committed to advance equality, as a part of the country's Hän Campaign (Equality Campaign). Chizuko Ueno, Chief Director of Women's Action Network, was one of the first recipients. Here is the full text of her acceptance speech delivered in English at a ceremony at the Finnish Embassy in Tokyo on June 17 Monday, 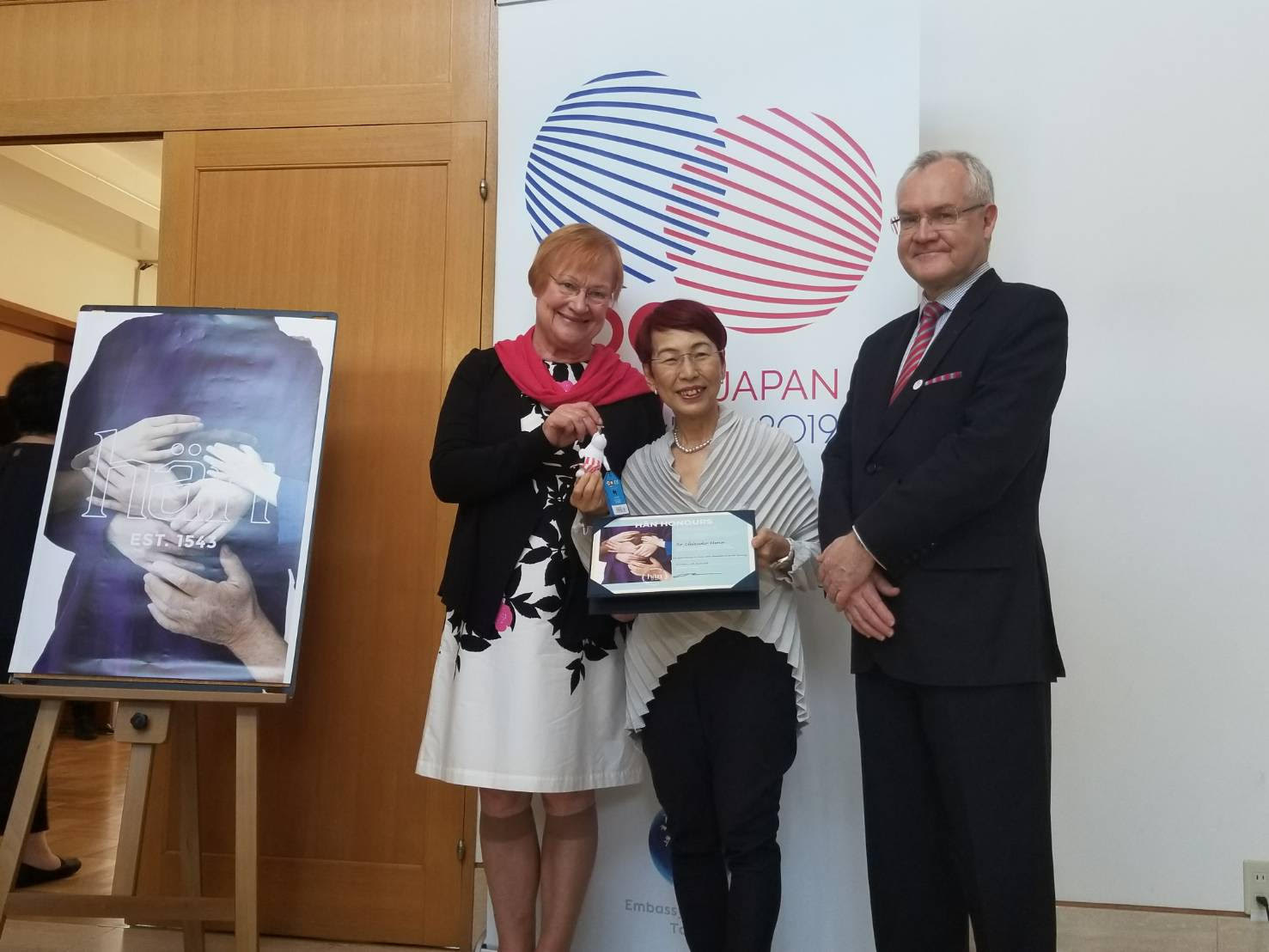 ”It is my great honor to receive a letter of thanks from the first woman President of Finland, Ms Tarja Halonen, because Finland is well-known as one of the top class countries of gender equal society. I am particularly glad to know that this year is the 100th anniversary of diplomatic relations between Finland and Japan, and this friendship has brought me a wonderful surprise.

This is unexpected pleasure for me, and if I became visible in your eyes due to my congratulatory address at the entrance ceremony for fresh students at the University of Tokyo, the University of Tokyo also deserves the same letter of thanks for their brave decision to pick me up. I am grateful that the Finish government pays attention to gender equality in various societies in all over 16 countries including Japan in the name of Han campaign. It seems less likely that the Japanese government would give me such an award, as they are aware that I am very critical of their policy. In this sense, I must give a letter of thanks to your country in return.

In spite of my honor, it is actually a shame to advertise the Japanese women's low status to the world, as the global ranking of Gender Gap Index is going lower and lower down to 111st among more than 140 countries. Compared with Japan's GDP, ranked at 3rd in the world, Japan's GGI is disproportionally low. This does not mean we, Japanese women, did not struggle for gender equality. To the contrary, we did try hard to promote women's status, but we still have a long way to go. The low status of Japanese women comes mainly from wage gap by gender, and women's under-representation in politics, which makes a sharp contrast to Finland. While 80% of Finnish fathers take paid child care leave, only 5% of Japanese fathers take the same leave, since they still strongly stick to the male bread winner model. We also lack the Law of Prevention of Sexual Violence, which you already have. Above all, it is most envious for us that your welfare policy can provide nation with enough public care services to children, the disabled and the elderly people.

Up until half a century ago, most of European countries remained as conservative, patriarchal societies, but they have changed themselves. Among them, Finland is most advanced in respect of gender equality. The women's right to vote and to be elected was first established in 1906 in Finland, and the first female president was elected in 2000, followed by two female prime ministers so far. Now I come to know that there is no longer an expression, "first woman something" in your country.

In addition, Finland is successful in developing human resources. Living in the small country, human resources are the only available resources, which is shared in common with Japan. Finish youth are highly educated, with more girls than boys, and their school score is the highest in the PISA ranking in the world. I am deeply impressed to know that this high school score was achieved not by severe competition, but rather by individually based evaluation avoiding relative comparison. Compared with Finish youth, Japanese youth have the lower self-esteem and less self-confidence regardless of gender.

All the evidences show us that Finish women and youth are happier than Japanese counterpart. Then why?

I would like to take advantage of this great opportunity to ask questions to my Finish sisters and brothers, in order to know the secret how you have achieved it. How did you organize women to change your society? How did you manage to convince men to join the change? What difficulties did you face and how did you cope with them? What policies were implemented to support women's work and life balance? What is the key condition to maintain relatively high fertility, which is the sign of women's hope for the future society? And then, what tasks do you still have to deal with? Moreover, I would like to add personal questions to President Halonen. What is necessary for women leaders like you? How did you overcome obstacles you faced? And how will you encourage young women to be leaders in the next society?

Your answers will give us empowerment, because what you have done can tell us why not we can!

Thank you very much.” 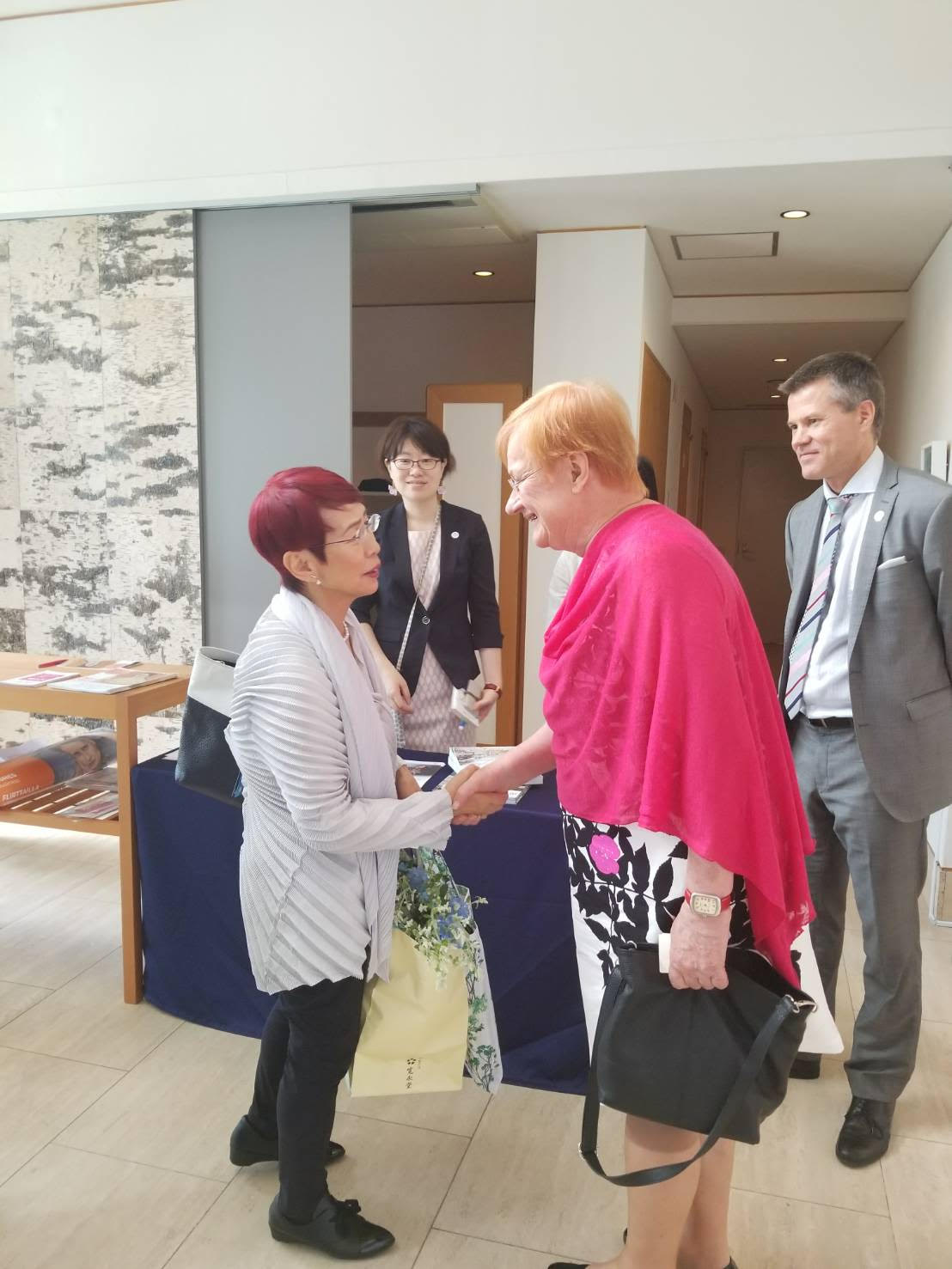