You Can See Yamato from Okinawa (Go Where Our Heart Takes Us: #32) 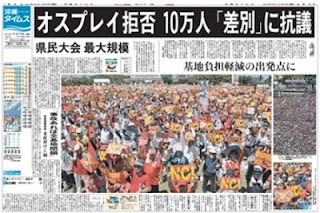 This year, marking the 40th year since Okinawa’s return to Japan, a rally was held on September 9th to oppose the deployment of Osprey.

Participants exceeded 100,000. The Mayor of Naha (Takeshi Onaga) strongly criticized the action taken by the Japanese and the U.S. government by saying, “the way this deployment is handled is no different from that after the war when they took over our land forcibly with a bulldozer and a bayonet.”

In 1952, in exchange for the San Francisco Peace Treaty, Yamato (the mainlands of Japan) submitted Okinawa under the U.S. military administration, truncating the southern islands.


Since then, the movement to reinstate the islands to Yamato had been tenaciously exercised by Uchinanchu. (The people of Okinawa refer to themselves as Uchinanchu)

Before and after the reinstatement of Okinawa, a freelance reporter and a critic, RoTakenaka, visited Okinawa countless times and predicted that “after being returned to the mainland, this island will be turned into tourism and the pure culture of Okinawa will be lost.” (May Your Strength be your Weapon! The Republic of Ryukyu)


After reinstating the islands on May 15, 1972, Yamato not only forced Okinawa to accommodate 75% of the U.S. military bases in Japan but relocation of Kadena Air Base to Henoko, as well as installation of helipad at Higashimura Takae, devastating the minds and lives of the people of Okinawa.

Furthermore, end of last year, with regards to the environmental effect assessment involving the Henoko relocation issue; to the question put forward by a press, “When will the written evaluation be submitted?”, Satoshi Tanaka, Chief Defense Facility Officer responded, “Who would say, ‘I am going to commit a rape’ before actually doing so?” He shocked everyone who heard this response, and of course, he was dismissed from his position a couple of days later for making such an abusive statement.


You can see Yamato from Okinawa

Anger held deep within the heart, Uchinanchu are keenly watching the future of this country: – the strengthening of military reorganization by Japan and the US governments with the movement of the Senkaku Islands in the background.


As stated in the First Book of Samuel’s Old Testament, “Those with the sword shall be perished by the sword,” is a common gumption in history.

Ryukyu Kingdom was engaged in “Tribute/Sealed book” trade once with China without using a weapon and had a rich distribution network in Southeast Asia. For example, a specialty of Okinawa, awamori (alcoholic beverage) is made by distilling fermented rice from Thailand, a delicious alcohol that was born from the ancient interaction with the Siamese. Yes, the sea has no border.


Okinawa is a Mystic Island

I found A Life of Okinawans (Tenkuu Planning Edition, Chie-no-mori Books, Kobunsha) at Teramachi Sangetsu bookstore in Kyoto. (Oh, I just noticed that Chizuko Ueno has an article in it.)


“Okinawa culture isn’t about this or that, but it’s a “chanpuru” (mixture) of this and that which was taken in from across the sea.”

Although Kachashii dance unite people together as a group dance, “chanpuru” blends people to make one unity but leaving distinct personality and individuality. That’s where the diversity of Okinawa lies.


The book begins with a statement, “There are 2 entrances to Okinawa, front door and a back door.”

I met an Okinawan woman who gave me a tour of both the front and back doors of Okinawa. But three years ago, she left for Niraikanai, the other side of the sea of ​​Okinawa without waiting for her 50th birthday.


By her guidance, we went straight up north for a tasting of awamori with 43-degree alcohol content at the brewery of “Helios Distillery” in Yanbaru. Then we headed down the Route 58 along the west coast to watch the sunset from Cape Manza. In the evening, we arrived at the Nanban Pottery made only with special soil and fire of Okinawa. For three days and three nights, the orange color of 1200° fire continued to burn. It was precious moments spent wrapped in scattered outbursts of cicadas and chirping sounds of birds from the mountains.

Next stop was Okinawa national Hansen’s disease sanatorium, “Okinawa Ai Rakuen” located in Nago City on Yagaji Island, floating in Hanejinai Sea. It was surrounded in obscurity quietness. There had not been a bridge to get across to the island before.


We then headed southbound and found a café where we entered in bare feet after walking on the beach. We were told the house next door belonged to Amon Miyamoto, a famous Japanese stage producer/director.

While the woman who guided me and I drank coffee, we got into a subject about a train I had taken often.


“I often used to ride the express-sleeper-diesel train named ‘Naha’ from Osaka to West Kagoshima and wondered why it was called ‘Naha’ since the final destination was Kagoshima and not Okinawa. I thought perhaps the train runs above the sea,” I said and her response was, “It’s because in 1968 the former Japanese National Railways named the new train just put into operation as a gesture of support for the reinstatement of Okinawa.”

That train retired after 40 years of its operation in March 2008.


“Ieraishan,” the night-fragrant flower that blooms in the evening at the gates of many Okinawan’s homes always welcomes guests warmly with its sweet fragrance.

As a traveler, when visiting any country, I always remember to be humble to the people of that land while appreciating their thoughtfulness.

Category: Travel at Leisure
Original article on the WAN website by Mine Yagi (September 20, 2012)
Translated and adapted by M. Doioka