Sent a Letter of Protest against the Absurd Ad that Encourages Sexual Harassment!

A disgusting ad encouraging sexual harassment was printed on page 5 of the Asahi Shimbun newspaper (page 10 of the Osaka Head Office version) issued on September 23, 2014..
It is a fully-colored ad of the first issue of MADURO, a magazine for men in middle to senior age, which features a Sean Connelly look-alike male model. The ad is a tie-up with the sound equipment manufacturer, Bose, featuring their headphones as the copy reads how comfortable it is to wear them on the plane. The line goes as the following:
“Once you get settled on the plane, try teasing a cabin attendant. When she talks to you, pretend you can’t hear her (actually you do hear her) and lean toward her as if you were asking what she just said. There is no other chance for you to get close in a 12-cm distance to a himena(Note: term coined by the writer to denote a lady) whom you’ve never met in such an open manner. Now, all you have to do is demonstrate your hard-earned skills.” (the bold text is as it is in the original) 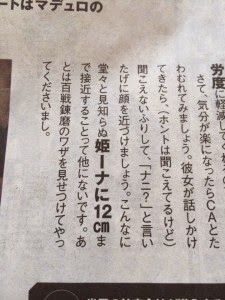 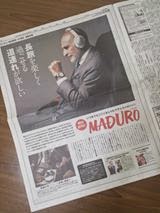 This is already disgusting enough, but what’s more annoying is that a message from the overall ad can be read that in a way that such a behavior is called “naughtiness” that all fashionable middle-aged and senior men are supposed to practice. This is nothing more than instructing and encouraging the readers to sexually harass cabin attendants, which is quite a problem.
Even here in Japan, sexual harassment has been recognized over a quarter-century as a serious social problem that violates women’s human and labor rights. The sexual harassment case at the Tokyo Metropolitan Assembly was found in June and the aftermath yet continues. This shows that sexual harassment still is a deeply-rooted and hard-to-solve problem. Considering these circumstances, I do not understand why anyone would ever print such an anti-social ad that encourages sexual harassment on such a major newspaper. This ad is planned and produced by the Advertising Bureau of the Asahi Shimbun Company. The Company is seriously liable as it not only allows an ad that encourages sexual harassment to be printed but also proactively produces these ads. MADURO magazine and Bose, the sponsors, are both equally liable as well.
As an activist and researcher on sexual harassment and violence, I was just unable to overlook that a newspaper, part of mass media, encourages sexual harassment by placing an ad like this. On the 24th, a day after the ad was printed, I sent a document to the Advertising Bureau of the Asahi Shimbun Company, MADURO magazine (yanG Co., Ltd.) and Bose K.K., protesting against the ad and questioning why they placed such an ad that encourages sexual harassment. This is the letter sent to the Advertising Bureau of the Asahi Shimbun Company: 201409朝日広告局御中（抗議と質問）wanアップ用 (personal information has been deleted). The documents sent to the other two companies have the same main message:
I found this newspaper ad on the 23rd and sent a message via Twitter around noon (my Twitter account: ＠peureka). Since 3,000 users re-tweeted my tweet by the 24th, I learned that a certain number of people felt as unpleasant and critical about this ad as I did. Among these people were middle-aged and senior men who are supposed to be the target audience of the ad. This ad accepts abuse of women’s human rights by encouraging sexual harassment, and at the same time, assumes that middle-aged and senior men want to practice such sexual harassment. Isn’t this quite offensive to all middle-aged and senior men?
I am not sure how much impact one citizen’s protest can make, but strongly hope that many people can learn about the problem through these various means, which could be the first step toward the society that does not allow sexual harassment. I would appreciate your cooperation in spreading and paying attention to this matter.
The Asahi Shimbun Company is currently facing almost excessive criticism due to their false reporting. Having sent another criticism to them at this timing was not quite easy for me as I do appreciate the Company’s continued proactive reports on women’s rights and human rights for women including the comfort women issue. This is why I protested against this ad that could weaken the foundation of their reporting attitude, wishing for their thorough review of this problem and improvement so that this will never happen again.
Let me use this opportunity to introduce my book in which I wrote that how insensitivity of middle-aged and senior men can be linked to sexual harassment:
Book title: Manager, The Relationship Is Sexual Harassment!
Author/ Translator: Kazue Muta
Publisher: Shueisha
Price: 799 yen
Original Article on the WAN website (September 25, 2014): http://wan.or.jp/group/?p=3316