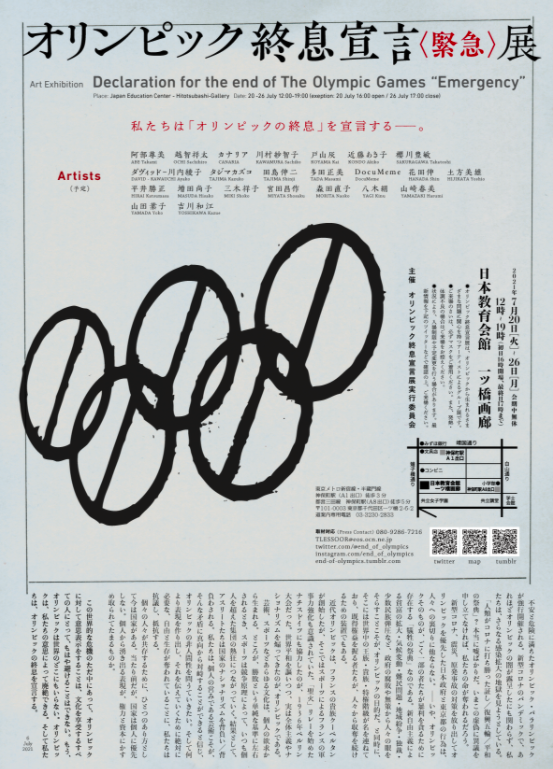 Declaration of the End of the Olympic Games “Emergency”
The Olympic and Paralympic Games, which are surrounded by anxiety and danger, will soon be held forcibly against the will of the vast majority of Japanese society. Amidst the darkness and sadness brought on by the global pandemic, we will soon be cursed with a further spread of infection caused by the Tokyo Olympics.
Leading up to this man-made disaster, Olympic organizers have deployed various slogans such as "Tokyo Olympics: proof that mankind has defeated Coronavirus,” “Olympic Games: celebration of recovery from the 2011 Tōhoku Earthquake Disaster,” and “Tokyo Olympics 2020: Peace Festival.” But all of these slogans are just hollow propaganda. If we do not challenge this falsehood now, we risk losing our freedom, our democracy, and even our lives.

The actions of the Japanese government and local Tokyo authorities - which have prioritized hosting the Olympics over necessary measures needed to combat the pandemic and even over the ongoing crisis caused by the 2011 Tōhoku Earthquake and subsequent nuclear accident - represent a profound betrayal of the people. We believe that this spectacle is not a “Peace Festival.” Rather, it is a "Sacrifice Festival" that has been pushed forward for the exclusive benefit of a small number of corporations, individuals, and politicians. The main purpose of the Olympics is to distract the masses from government and corporate corruption - not only in Japan, but around the world. In recent decades, neoliberal policies implemented by governments and championed by oligarchs and private capital have led to an explosion in wealth inequality, global climate collapse, regional conflicts and refugee crises, and suppression of human rights and ethnic minorities by various authoritarian regimes. These privileged classes of royalty and aristocratic oligarchs who control the IOC use the Olympic Games as a device to continue to distract from their theft and exploitation of the people.

The modern Olympics were founded around the turn of the 20th century by French aristocrat Pierre de Coubertin, who was at that time concerned with projecting France's military power through sports. Later, the IOC collaborated with Nazi Germany by allowing it to host the 1936 Berlin Games. This event also gifted to the world the Nazi invention of the Olympic torch relay that is still glorified as a symbol of the Games. While proclaiming world peace, the Olympics have actually fueled totalitarianism and nationalism for over 100 years.

All material aspects of culture such as art and sports are born from the desire of individuals and communities to lead better, richer lives. However, when cultural expression is reduced to the simple criteria of victory or defeat in sport, competition often fuels dangerous tribalism that transcends communities and divides humanity. As a result of the modern Olympic Games, athletes are reduced by the powerful – IOC oligarchs, governments, corporations - to mere vehicles for nationalism. We believe that art, which can be a revolutionary act of individual expression, can confront this contradiction head-on. Through our work, we seek to question the inhumanity of the Olympic Games. Above all, the opportunity to live and thrive is absolutely necessary to create and convey expression. Because these games fundamentally threaten our lives, we protest and resist their deprivation of our freedom and survival.

For individuals to coexist in society, we now find ourselves as participants in imperfect democratic union. But as we can see, our democratic processes and the nation do not prioritize the interests and lives of its subjects. We refuse to allow the expression that springs from the individual to be smothered by power and capital.

We are in the midst of several global crises that threaten our survival. All citizens who value humanity and cultural expression through art must urgently reject the Olympics. The Olympics are not needed anywhere in the world. The Olympics can be abolished at our will. Today, we declare the end of the Olympics.