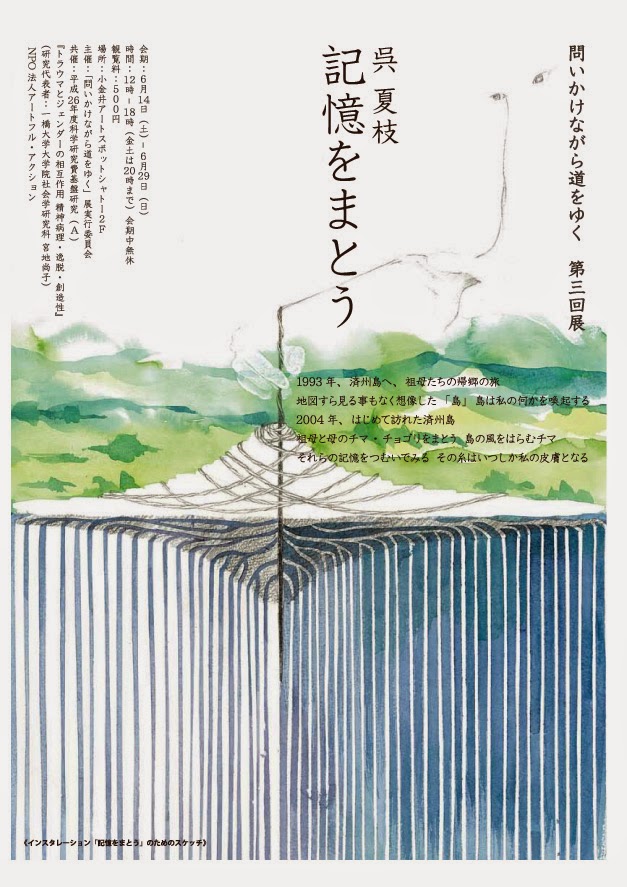 An exhibition of OH Haji, a textile artist who received art education in Kyoto and sewing training in Seoul, Korea, is to be opened in Koganei Art Spot Chateau, Koganei City, Tokyo, from 14 to 29 June, 2014.
According to the caption on its poster, the exhibition was inspired by OH’s grandmother returning home to the Jeju Island in 1993 after so many years of having imagined about the island without even locating it on a map, and by OH herself visiting the island for the first time in 2004 to wear Korean costumes called “chima jeogori” of her mother and grandmother.
The installations including the costumes shown in the leaflet of the exhibition below will be exhibited. A workshop to “unravel and undo the knots” will also be held on Sunday, June 22, in the same venue. It is organized as part of a series of workshops initiated in Western Japan as Breaker Project activities, suggesting OH’s own way to retrace memories in pursuit of untold memories or memories beyond verbal description.
Participants of the workshop in Koganei are requested to bring in old knit wears to be unknitted and encouraged to tell their individual stories about the wears while unknitting them into balls of yarns. 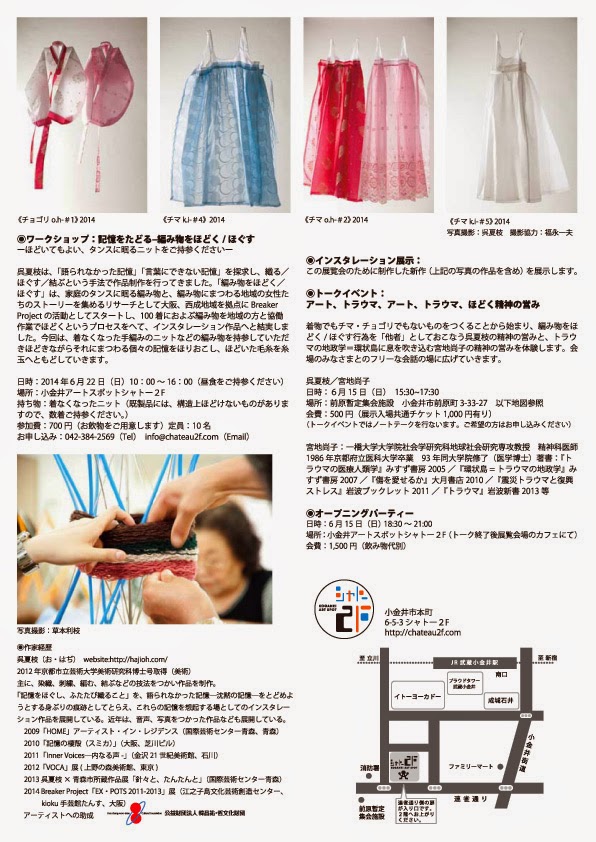 MIYARA Eiko’s exhibition “Okinawa – With Love and Peace” is underway in Maruki Gallery for the Hiroshima Panels, Matsuyama City, Saitama Prefecture.
The artist MIYARA was born in Fukuoka Prefecture, Kyushu, and started her artistic career in Tokyo in 1958.
Since she moved to Okinawa to live with her Okinawan husband in 1971, just before the islands’ administration was returned to Japan, she has been painting the oppressed and wretched, especially women, in Okinawa, Vietnam and other parts of Asia.
Maruki Gallery is holding her exhibition with moral and financial support from many people in order to remind the historical and social issues and to raise consciousness about the structural problems Okinawa is suffering as is represented by the US military bases.
The exhibition is scheduled to continue until July 12, 2014. 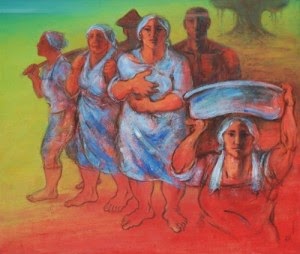 Translated and adapted by FUKUOKA A.A.
from Japanese website:
http://wan.or.jp/art/?cat=2