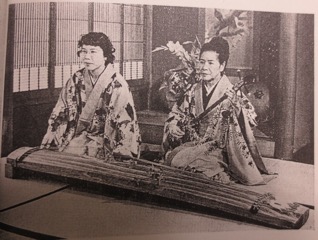 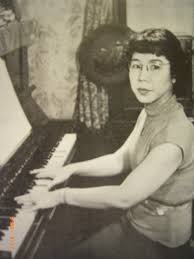 The 12th series is about Kikuko Kanai from Okinawa (honorific titles omitted). Born in 1906 on Miyako-island, she passed in 1986 in Tokyo. Her maiden name was Kawahira. The Kawahira family branched out from the Ie family in Shuri during Kikuko's grandfather's generation and contributed immensely to the island of Miyako. Her father was also a prefectural assembly member.

Kikuko’s mother was a pillar of the family. With the economy after the First World War booming, the trades were at a high price for the exceptional technique of "Miyako Jofu weaving". After 10 years of running the factory, she repaid the debt left by her father and bought back the land and house that had been given to others. She had one caring older brother, and her second older sister is Kana Takara, who shone in her later years as the “Uta-hime (lit. song princess) of Okinawa.”

From an early age, Kikuko showed interest in the koto, shamisen, and Western musical instruments. With the support of her mother, she was admitted to Naha’s Prefectural First Girls' High School. Kikuko made incredible friends there, and her art teacher's words, “Why don’t you attend a music school,” remained in Kikuko's heart.

At first, she studied vocal music at Nippon Music School. She was overwhelmed by the quality of the students in Tokyo. Still, her innate unbreakable spirit helped her graduate, and she eventually acquired a job at the activity photo studio and continued singing every day. One day, she was offered a singing position in the Tokyo University of Commerce (now Hitotsubashi University) orchestra. There she met Mr. Genshirou Kanai, who was to become her lifelong partner. He was a young man who played the trombone as a hobby. Soon after, their friendship grew tighter to the point where they could say anything to each other.

While making her way into the world of music, Mr. Kanai proposed to Kikuko. "Stop working part-time and study. I'll take care of it," he told her. While both their families opposed their marriage, they were happily united. In 1935, at the age of 27, she entered Tokyo University of the Arts on her husband's recommendation, and she chose to study composition. Her husband was a calm and gentle person who would continue to support Kikuko. Kikuko's devotion to composing music was due to her husband's cooperation, according to her friends.

In this age of male predominance, Kikuko’s male classmates looked down on her, as if to say, “what can a woman do?” She received prejudiced comments such as, “what are Okinawa folk songs even worth?” A woman and an Okinawan native who adored Okinawan music, Kikuko’s two main pillars of her identity had to stay standing in a challenging environment.

Amid such circumstances, she was saved by the open-minded perspective of composer Koichi Shimousa and received guidance that surpassed the borders of gender from Professor Kojiro Kure. Kikuko, who always had the idea of “spreading Okinawan folk songs” in her heart, favored creating works that incorporated the melodies of Okinawan folk songs.

When she graduated from Tokyo University of the Arts in 1937, the National Mobilization Law was promulgated, and World War II broke out in Europe the following year. In 1940, the Imperial Rule Assistance Association was established, and Japan headed towards war.

When the Pacific War began in 1941, the annual recital of Professor Kure's students was held at Hibiya Public Hall in Tokyo. Kikuko performed her symphonic poem “Memories of Ryukyu.” Because the Western style was mainstream at the time, some disdained it at first, but in the end, she received the loudest applause, acquiring an excellent reputation from the teachers. While there were concerns with the style of the Okinawan folk songs being unaccustomed, Kikuko was happy with the terrific results.

On December 8th of the same year, the Imperial Japanese army launched its attack on Pearl Harbor, and newspapers continued to print the imperial headquarters announcements. The Japanese people, believing in the invincibility of the Japanese military, went into a frenzy. Amid the rage, playing the piano was seen negatively, and the notes in the orchestral score were sometimes misperceived as ciphers for spies. Even then, Kikuko continued to move forward.

In 1944, the “Kikuko Kanai First Recital” at the Hibiya Public Hall was held, where she presented the “Ryukyu Butoh Suite” and the symphonic poem “Poetry in Space.” The conductor was drafted the day before, and Kikuko had to fill in the post. The audience was amazed by the female conductor, and the concert ended in a storm of applause. There was also a major newspaper article on the event. The following year, the second recital, “Ryukyu Rhapsody no. 1” and “Symphony no. 2” premiered.

As Japan hurried into war, Tokyo was continually hit by air raids and incendiary bombs. Food was in short supply and people were occupied with building air-raid shelters. Music could no longer be a priority. The military put up posters to raise citizens’ spirits and the news reported the outstanding achievements of the Japanese army, but they were far from the truth. Her husband remained in Tokyo to protect his workplace, and Kikuko evacuated to Yamanashi. Although there were rumors of terrible air raids in Okinawa, the lack of accurate information left her in the dark until she witnessed the tragedy of her home in the extra edition of “winning the battle of Okinawa.” In 1945, Japan suffered a major defeat after the detonation of two atomic bombs. The couple managed to reunite in Tokyo and lived there as they worked to recuperate.
In 1953, Kikuko visited her motherland, Okinawa. She learned about the tragedy that struck her home. She also fulfilled her wish of visiting the “Himeyuri Tower” where her comrades rested. Okinawa came under U.S. rule in 1952 and continued until 1972 when it was returned to Japan. 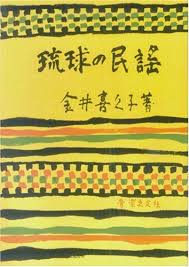 In addition, one of Kikuko's major achievements was the transcription of Okinawan folk songs. She worked on organized research and investigations of folk songs, nursery rhymes, and beautiful melodies from the islands of Okinawa, Iejima, Miyakojima, and Yaeyamajima. Carrying a heavy recorder device, she traveled to a shamisen teacher's house dozens of times. She listened to the recording and transcribed the shamisen and lyrical parts. Translating the lyrics into Western musical notation was a considerable endeavor. After several years, she finally published “Ryukyu no Minyo” from Ongaku no Tomo Publishing. For this, she received the prestigious Mainichi Publishing Culture Award. According to her children, Kikuko respected the composer Bartok (1881-1945). Incidentally, Bartok, of Hungary, collected children's songs with his sworn friend Kodály on a recording device.

In 1954, she was selected as a Japanese representative at the “7th International Ethnomusic Congress” and traveled to São Paulo, Brazil. She gave a lecture while playing her thesis “Japanese and Okinawan Music,” which received an excellent response. After that, she was also in charge of the music for a movie starring Marlon Brando and created many works using Okinawan folk songs, such as the Kabuki drama “Tosen Monogatari,” ballet music, operetta, and variations of “Tingusa no Hana” for flute and piano. 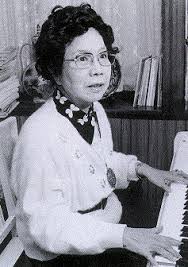 Kikuko dedicated her life to peace in Okinawa and equal rights with the mainland, repeatedly petitioning and working to build the Okinawa Peace Memorial Museum. Kikuko, who thought of Okinawa, loved Okinawan folk songs, and continued to seek the Okinawan word Nirai Kanai (a utopia beyond the sea), passed away at the age of 80.

Mr. Hiroshi Kanai, her son, generously gifted us with the above “Ryukyu folk songs” and precious musical scores, and he kindly answered our numerous questions. We would like to take this opportunity to thank him for his kind contributions from the bottom of our hearts.

The original article in Japanese: https://wan.or.jp/article/show/6874#gsc.tab=0