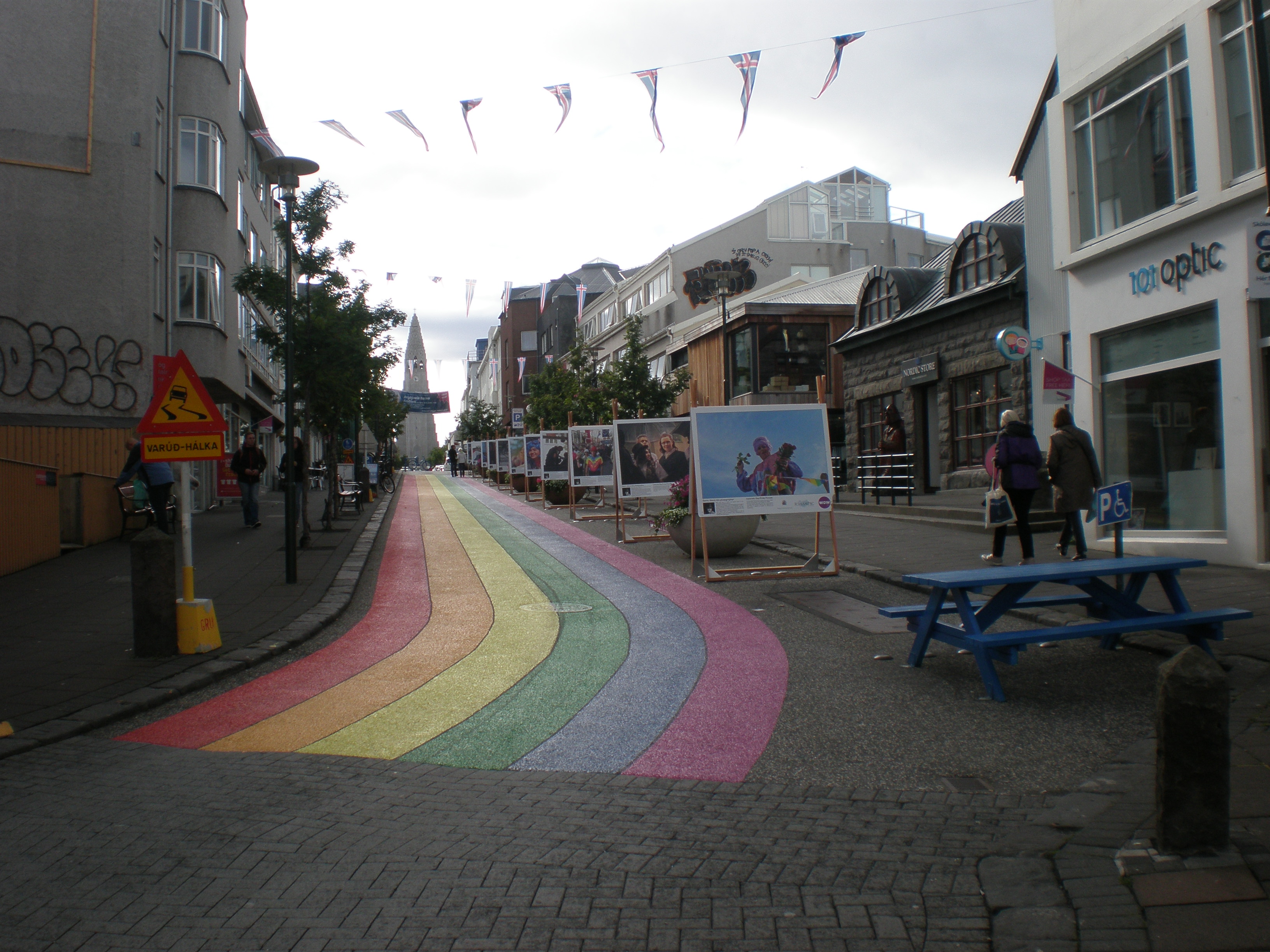 The rainbow road in shopping area

(Continued from the previous article)

Another issue that I want to report is the “advanced” culture of IS. On the way back from our bus tour to the capital city, our guide told us the arrival to each hotels could be late as there is an LGBT pride parade in the middle of town. I was expecting to encounter it but it was unfortunately over. On the following day I discovered the rainbow road in the busy shopping area. The road is painted with 6 rainbow colors and many large pictures related to the parade – proud faces, flags, slogans, and so on were shown at the shoulder of the street. Since the gay parade started in 1999, it has been involving more and more people every year. June 17th when the first parade took place became the national holiday. Terrific! The guide says the word “gay parade” without any tone of hesitation. The unique atmosphere is not such as the one you walk into on Ashbury St. in SF, US, as there are many Iceland tourists all over the area. I’ve heard about the office of LGBT somewhere, but couldn’t find it. 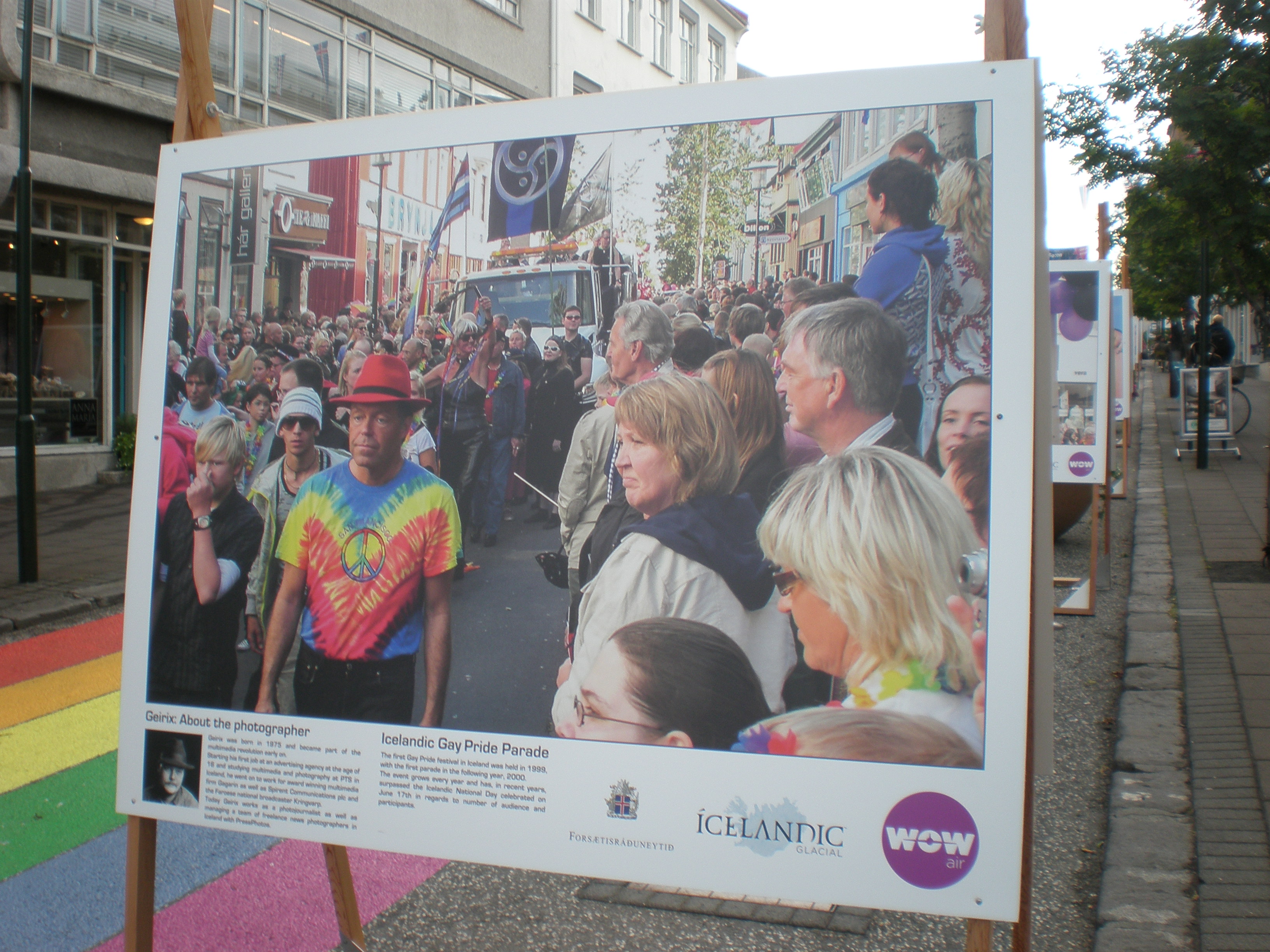 Pictures on the rainbow road 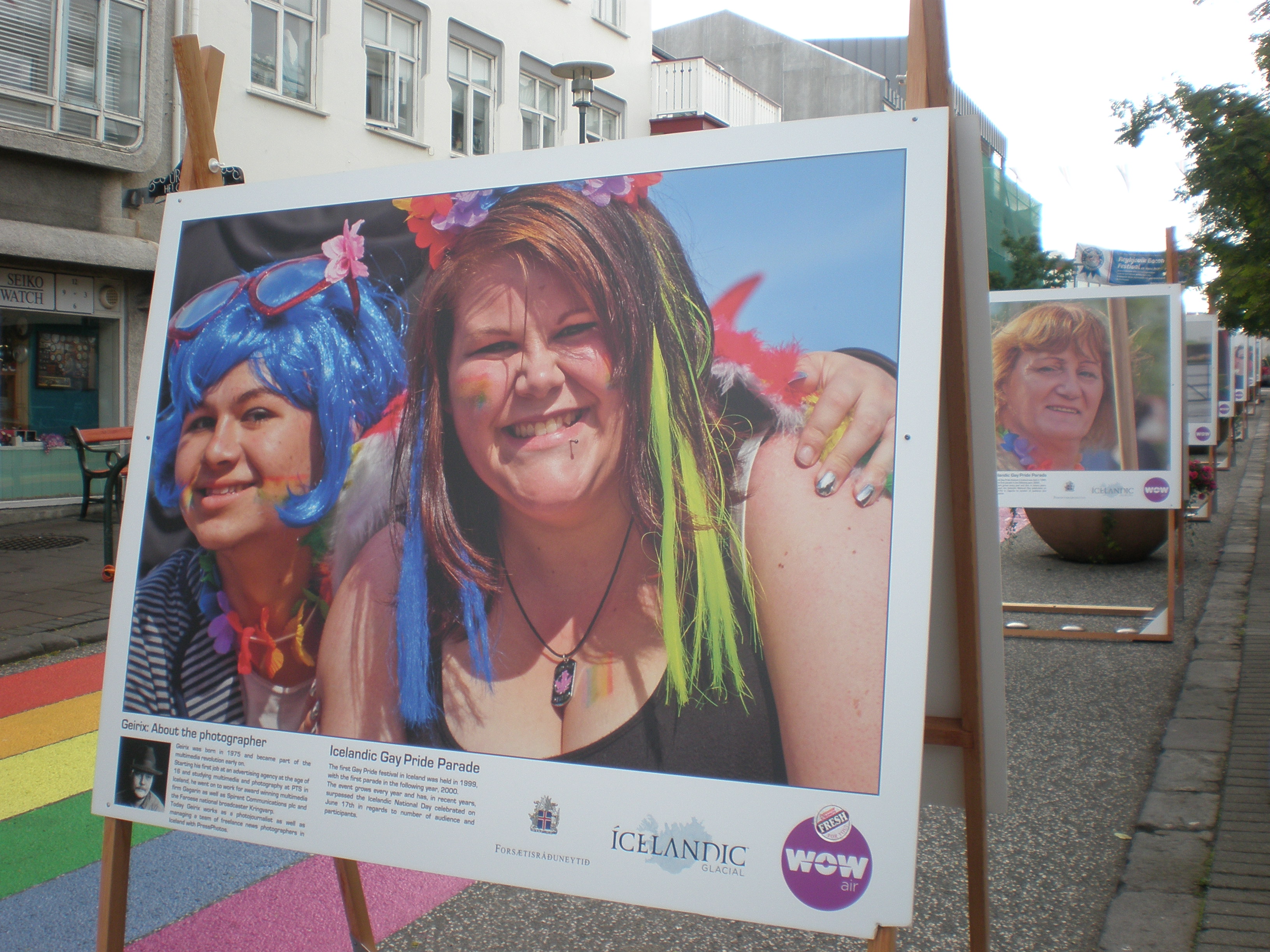 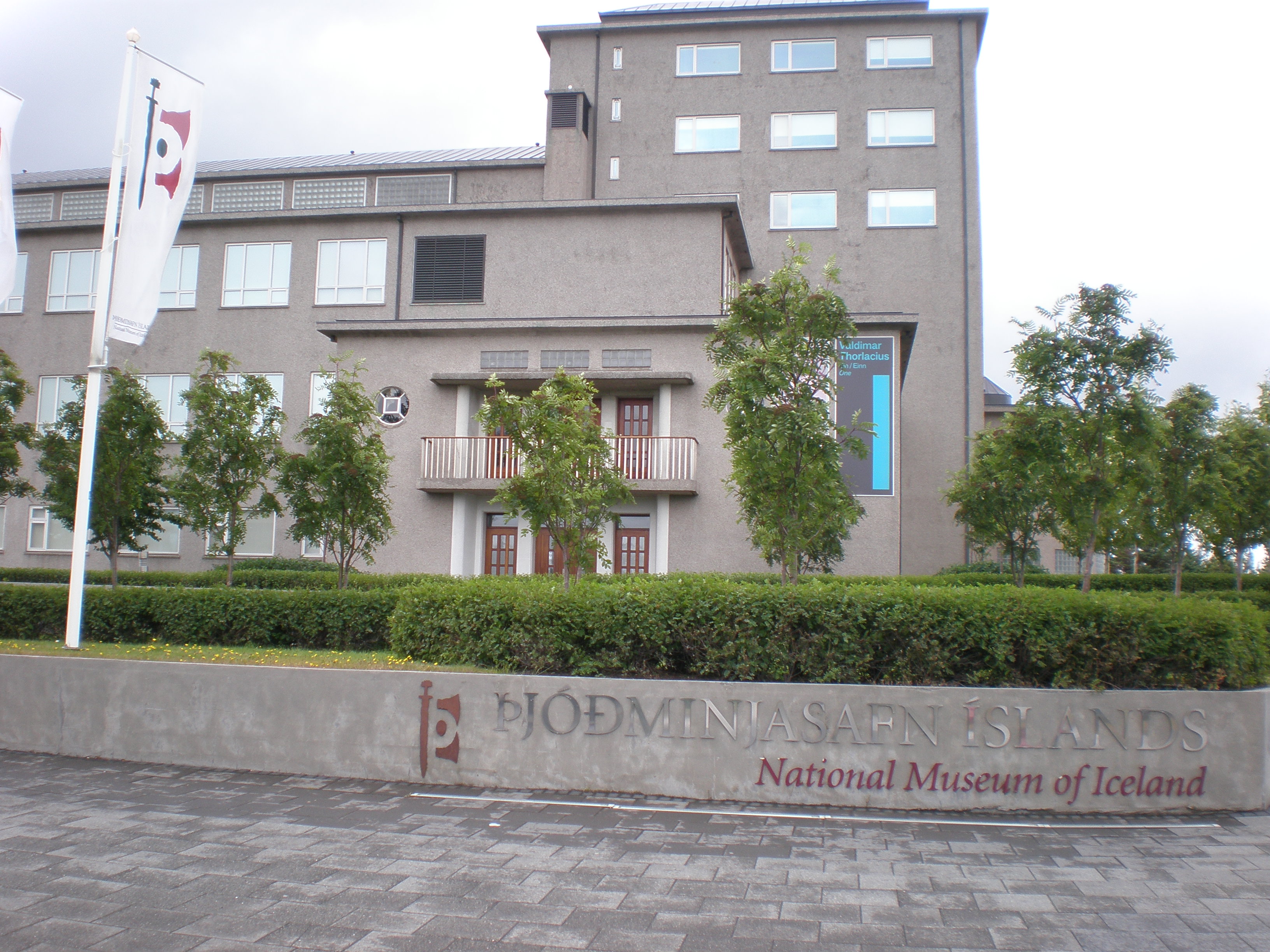 The other surprise was the women’s corner in the National Museum. Can you imagine there is a women’s corner within the national museum? Yes, there is, in IS. I somewhat knew that IS was quite feminism-oriented but is it this much!? At the entrance of the women’s corner, you see right away the large picture that young women show their nipples being half-naked. The caption says, “Emancipation from our nipples!” The picture was taken in front of the House of Parliament in 2015.

Just other side of the wall, you see an old sepia colored picture in which women with long black dresses gathered at the same place, seeming to claim the equality between women and men. The woman officer in the room told me that they have been fighting against any sexual discrimination since one hundred year ago. Sexual harassment as well as any kinds of violence against women is still big issues.

The first woman president voted by national election in the world, Ms. V. Finnbogadotti, had served four terms from 1980 to 1996. She is now 88 years old and still vigorous. There is her presidential picture too. It is fortunate for the museum staff to say hello when she visits her close friend working there. The officer mentioned this proudly. 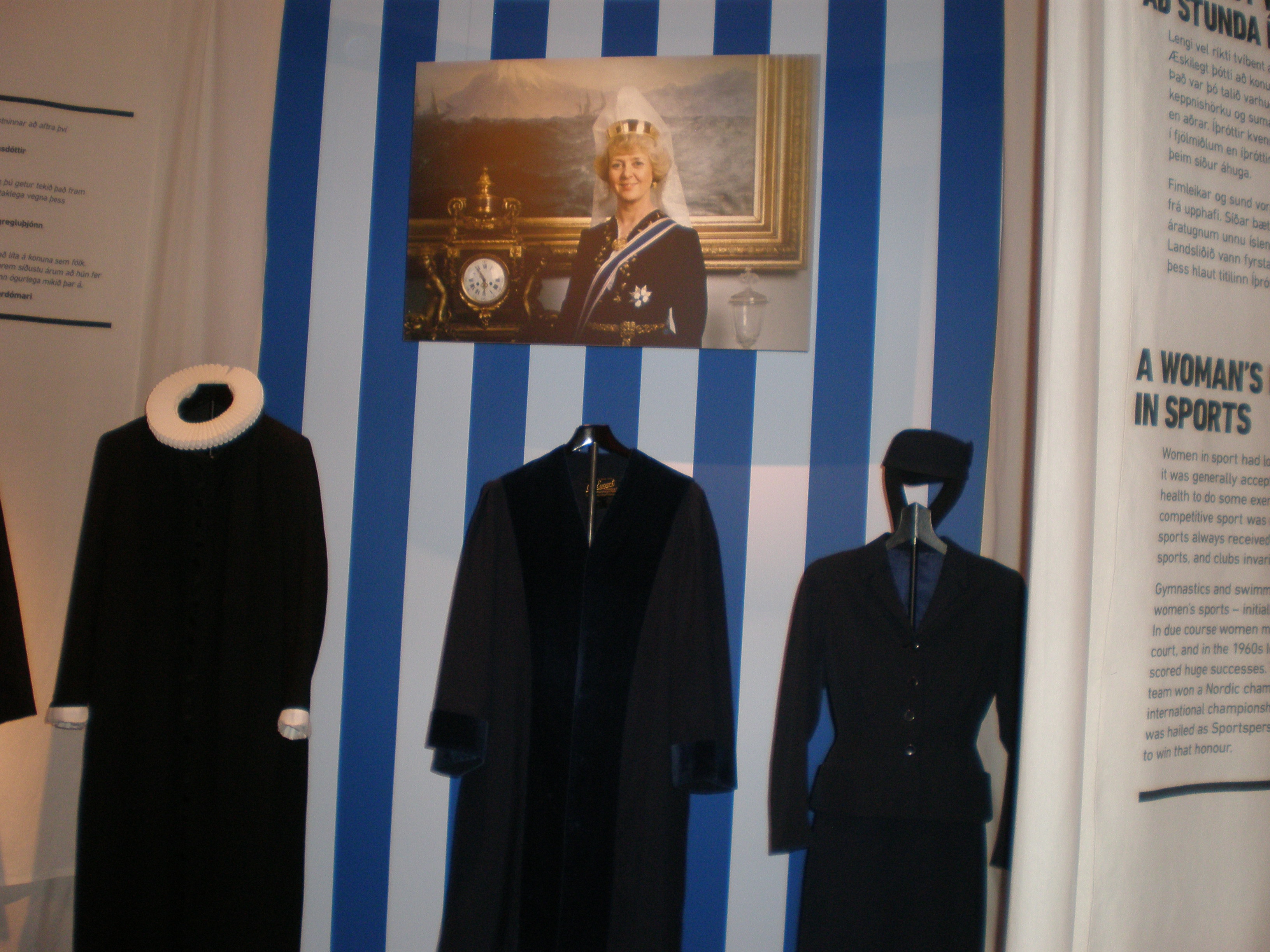 Exhibits at the National Museum 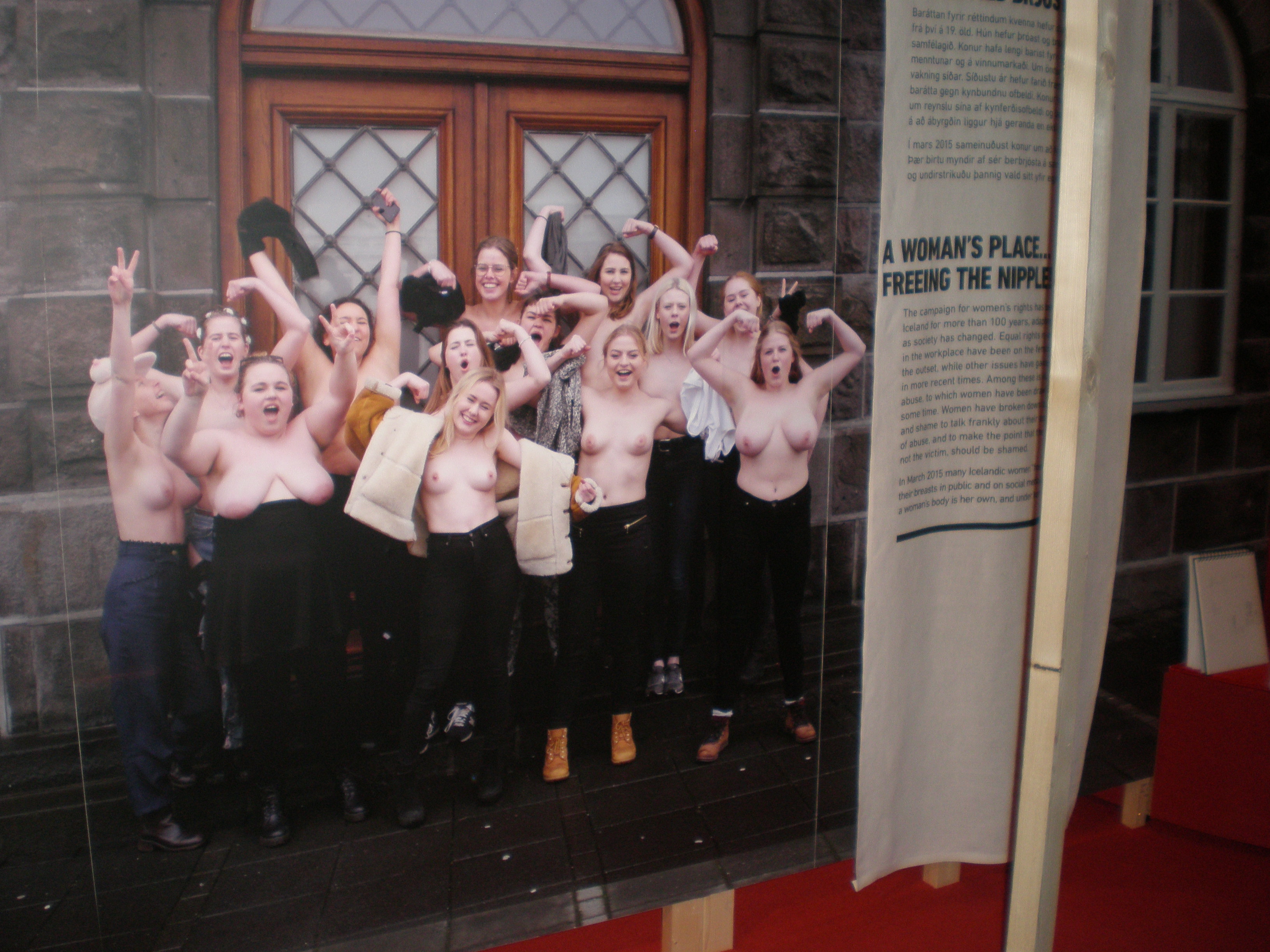 So I strongly recommend that you visit IS. People tend to be perfunctory, I’d say, (every event starts at least 10 minute late, they give you erroneous information with confidence, and my friend’s winter coat that was left in the one of the hotels has never been returned to her), but are very kind for sure. For example, we visited the suburban museum on the next day of our arrival by a public bus. At a museum, staff suggested us to take a different bus route which gets back to the city center quicker. There was a bus stop at the place indicated but the route # and time table were different from what I was told, and we had no idea about the direction written in the Icelandic language.

I walked down to the street and found a golf shop. I asked the owner to help us. He opened up his PC at once and checked a bus schedule. He offered to take us to the bus stop in his car because the next bus would come soon and if we walked, we must miss the bus. Thank God! There are lots and lots of such stories I experienced in IS. I usually ask anybody on anything, at any time, in any place, and my English is understood by 90% of inhabitants. I avoided to ask queseionts to backpackers, but I still heard the answer from a by-passing woman: “I just arrived last night. I know nothing of the area” We looked at each other smiling!

I was surprised to learn that the living expenditure within the city is quite high. My very small room without bath equipment was more expensive than any shabby business hotel in Japan. Due to the loud noise around the house as back packers come in middle of the night and leave early morning, I once meant to move out. There was a kitchen where many residents cooked their meals by getting foodstuffs from nearby supermarket. The commodity is generally high. When I happened to walk in the kitchen, visitors from Greenland who occupied the whole kitchen were cooking for 10 of their company. I watched them with admiring eyes, and they shared their soup with me. It contained basically lamb with many vegetables such as carrots, cabbages, potatoes and unknown something. How delicious!! All I made was a lox with bagel bread, salmon or ham, and cream cheese. “Kitchen diplomacy” made me stop moving out. There are many guest houses as such all over the city. The part time man at the front desk said to me that inhabitants here have two jobs because of high commodity.

Mina-sama, let’s visit Iceland with preparations for winter in the middle of summer. July is warmer, I’ve heard. （アイスランド大使館から粗品がこないかなあ）