On April 10, 2016, an event was held to commemorate the 70th anniversary of the exercise of women’s suffrage in Japan.

Since the "Declaration for Doubling the Number of Women Legislators" was adopted there, Parity Declaration has been adopted every year at the annual commemorative events.

Toward the 80th anniversary of 2026, we pledge that every year we will expand the circle of friends who commit to increasing the number of women parliamentarians.

On April 10, 2021 –75 years after April 10, 1946, when Japanese women first exercised their right to vote– we, participants of the Online Talkfest to Commemorate the 75th Anniversary of Women’s Suffrage, "Let’s Increase the Number of Women Parliamentarians! Let’s Connect the Power of Women!" hereby make the Parity Declaration, recognizing that men and women should participate equally in every decision-making process.

Full and equal political participation of women and men will strengthen democracy, contribute to the eradication of gender discrimination, violence, and poverty, and lead Japan to a prosperous, tolerant, diverse, and peaceful society based on individual dignity.

Today, as we witness that the spread of COVID-19 has aggravated global and social fragmentation, violence against women, as well as discrimination and exclusion against minorities, we are acutely aware that the lack of parity in decision-making is exacerbating existing problems and preventing the realization of effective and democratic infection control measures. The realization of gender parity in decision-making is an urgent task.

On our 70th anniversary in 2016, we resolved to double the number of women parliamentarians within ten years. Two years later, in 2018, "The Act on the Promotion of Gender Equality in the Political Field" was enacted, for which we had urged. The basic principles state that political parties should aim to have an equal number of men and women as far as possible when fielding candidates. It was the moment when Japan’s version of the Gender Parity Law was born.

Three years have passed since then. Unfortunately, we are still far from doubling the number of women parliamentarians that we have determined to achieve. A general election will be held within this year, but it is not expected that the number of women parliamentarians will increase much. A major factor is that political parties lack political will. Several political parties have set numerical targets for women candidates, but we strongly urge those parties that have not set numerical targets to do the same as soon as possible. We also call for the Japanese version of the Gender Parity Law to be amended to make numerical targets mandatory. Anti-harassment measures are also urgently needed.


In order to increase the number of women representatives, it is essential that the significance of making the parliaments "parity" be widely known in society. The efforts of each and every one of us have changed our society dramatically compared to five years ago. Currently, Japanese society is experiencing a rapid change of social awareness, and a new norm is being formed in which sexist comments will not be tolerated. Nagata-cho and parliamentary politics have been left behind by the changes in society.

Let’s change the political landscape by connecting and strengthening the power of women. If we do not act, politics will not change. Let us further promote the growing trend of gender equality in society, promote the elimination of gender discrimination in the field of care, and work towards the realization of peace.

We will do everything we can in our respective roles to double the number of women parliamentarians who listen to women’s voices and respond. At the same time, we call on men to act positively for the development of democracy and gender equality.

We will move forward step by step to build a fair society where equality between men and women is fully realized. 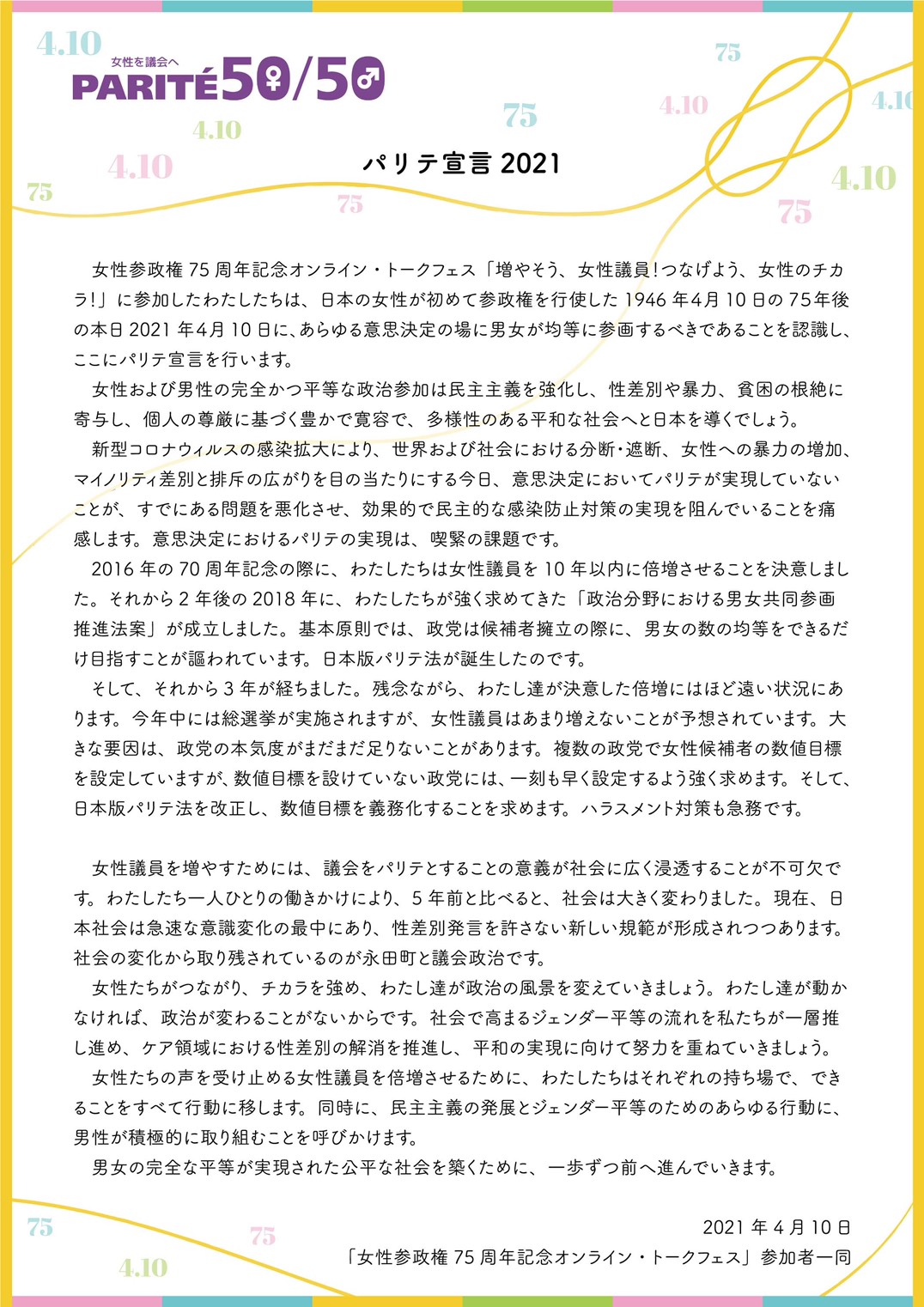